El Nino May Have Only A Minor Impact 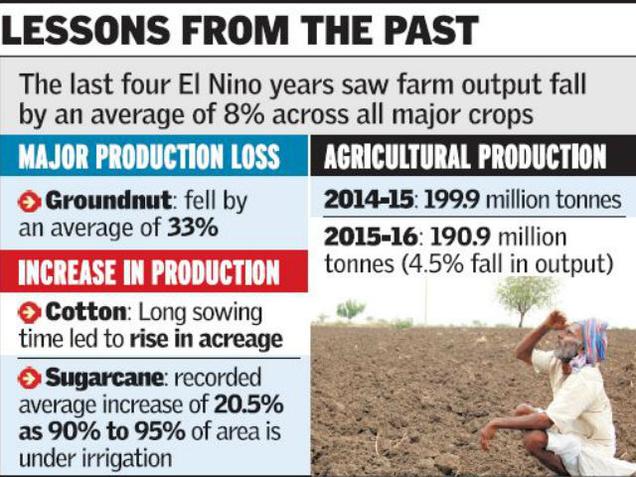 This year’ s farm output may fall by only around 4.5 per cent despite the projection of a strong El Nino year by the India Meteorological Department, says a recent report. During the previous El Nino years, farm production fell by an average of 8% across all major crops. A normal monsoon, however, could lead to a 0.6-% growth, the report says.

The report by brokerage house Edelweiss has found that over the last four El Nino years (1997, 2002, 2006 and 2009), production fell by an average of 8 per cent compared to the production in the previous years, across all major crops. However, some crops suffered more than others.

“Major production loss is observed in groundnut followed by moong, castor seed, bajra, sesame, jowar, maize and paddy. The increase in production of cotton is mainly attributed to an increase in acreage due to its long sowing window as compared to other crops. Sugarcane has done well even during El Nino years as almost 90-95% of cane area is under irrigation across the country,” the report says.

Groundnut production, for example, fell by an average of 33 per cent across these four years compared to sugar, which saw an average increase of 20.5 per cent.

However, this year will not see such a drastic fall in production despite it being subject to a strong El Nino effect, according to the report. The report forecasts 2015-16 agricultural production to be 190.9 million tonnes compared to 199.9 million tonnes in 2014-15, a fall of 4.5 per cent. Here, too, some crops will suffer more than others.

“In the case of a below-normal monsoon we would be forced to downsize our production prospects. Cotton has an advantage of the longest sowing window, sugarcane is hardly rain dependent as most of it is grown in irrigated regions and urad will do well in terms of yields with lower rains. However, crops like paddy, maize, groundnut, guar, castor, tur, moong and bajra would suffer due to lower yields,” the report says.

While the IMD has forecast a deficient monsoon, private weather company Skymet has maintained that this year will see a normal monsoon. June so far has seen 16 per cent more rainfall than the average. In the event of a normal monsoon, the report predicts an average increase of 0.6 per cent overall, with only castor seed, rice, bajra and sugar seeing a fall in production levels.

However, the report pegs this as more to do with acreage under these crops rather than productivity levels. “Acreage under paddy, bajra and castor are likely to shrink this year. Higher returns from other competitive crops will keep the trend of shifting acreage from bajra to other crops ongoing for this season as well. While, poor returns fetched from castor last year will result in a drop in acreage,” the report says