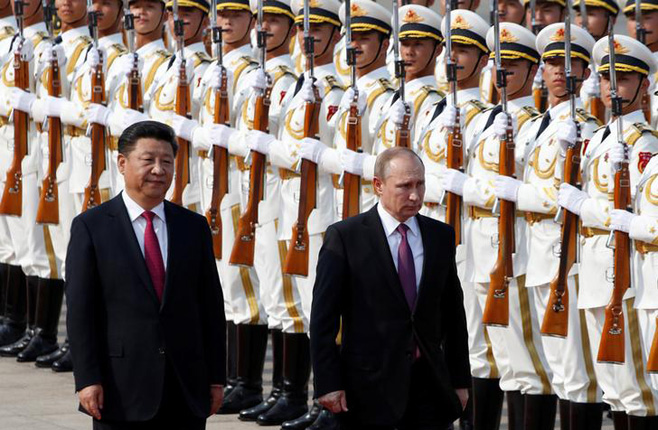 As the Western world reeled from Brexit fallout, President Vladimir Putin flew to China to meet his counterpart, Xi Jinping. The goal, as ever, was to underline new cooperation between Russia and its eastern partner. The result, as ever, was that the Chinese stopped short of embracing the Russians as a true and equal partner.

Russia’s long-promised pivot to the East was designed as a gesture of defiance to the West. On a practical level, officials also hoped it would offset the loss of the European Union, which was Russia’s largest trading partner prior to the imposition of sanctions in 2014.

Ahead of the meeting, Foreign Minister Sergei Lavrov set a target of growing bilateral trade with China from $63.5 billion in 2015 to $200 billion in 2020. In the previous year, trade fell almost 30 percent; in the first four months of the year, the figure eked up by just 2.7 percent.

It seems a tall order. Beijing is in the driver’s seat, and they aren’t nearly as interested as Russia to make deals. This was demonstrated by the absence of any significant trade deal resulting from the trip.

“The numbers are not very impressive overall because the Russian economy is in a terrible state,” says Alexander Gabuev, an expert at the Carnegie Moscow Center. “There is a growing dependence between the two countries, but it is very asymmetrical.”

On the other hand, Russia needs foreign investment and China has money. A bilateral commission has selected 58 joint projects to pursue with an investment pool of $50 billion, and 12 of the projects are already underway. China is also becoming a large buyer of Russian food and produce.

Putin said the two sides would also move forward on developing a new wide-body civilian aircraft and a heavy-lift helicopter. The president reported the two countries had also agreed to explore co-development of space rocket engines — an area where Russia remains a world leader.

Important geopolitical factors continue to dominate the relationship. Putin needs results from his efforts to decouple from the West. China needs to maintain at least neutral relations with its large neighbor. Additionally, they must also find a way to coexist in developing Central Asia — an important geopolitical crossroads between East and West.

“Russia’s idea is that it acts as the hard security provider in the region, while China plays the role of developer,” says Gabuev. “Development is crucial for maintaining security there, so the Russians have said ‘lets divide it up to keep the region stable and keep the Americans out.'”

As before, despite talks, the two sides could only agree to cooperate on small-scale projects.

“It’s the first step in a very, very long road, and there will be many more setbacks to come,” says Gabuev.