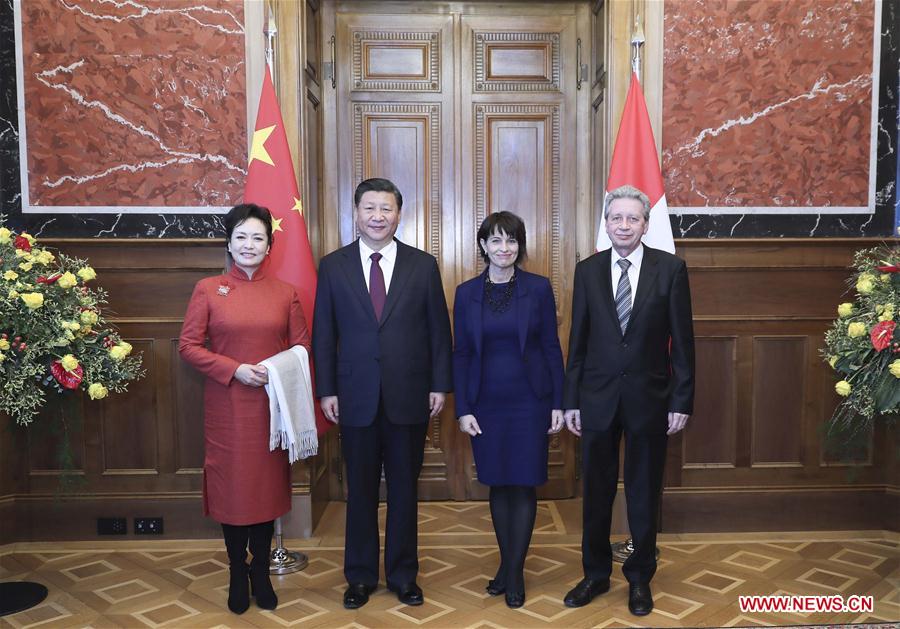 Chinese President Xi Jinping said Sunday that he is looking forward to consolidating friendship and boosting cooperation between China and Switzerland at a welcome ceremony hosted by the seven members of the Swiss Federal Council.

Xi arrived in the Swiss financial hub of Zurich Sunday noon to pay a four-day state visit to the Alpine country, the first by a Chinese president in the 21st century.

Before traveling by train to the capital city of Bern, Xi and his wife Peng Liyuan were greeted by Swiss President Doris Leuthard and her husband Roland Hausin at the airport in Zurich. The two heads of state had a brief talk in the journey.

“My visit is aimed at consolidating our friendship, boosting our cooperation and promoting peace and development together with the Swiss side,” the Chinese president told the seven Swiss Federal Councillors at the welcome ceremony held at the Federal Palace in the historical Old Town of Bern.

“I am looking forward to having talks with the Swiss side on deepening our practical cooperation in various areas and enriching the meaning of our innovative strategic partnership,” Xi said.

During his Switzerland trip, the president is also scheduled to attend the 2017 annual meeting of the World Economic Forum (WEF) in the ski resort of Davos, and to visit the headquarters of the United Nations Office at Geneva (UNOG), the World Health Organization in Geneva and the International Olympic Committee in Lausanne.

Xi will deliver a keynote speech at the opening ceremony of the Davos meeting on Jan. 17 and another one at the UNOG on Jan. 18. The president will be the first Chinese head of state to attend the Davos meeting.

“I hope to, through attending the WEF annual meeting and visiting the international organizations, gather consensus with all sides on maintaining world peace, promoting common development and settling major global issues under the current situation, thus delivering positive energies to the international community,” the president said.

Speaking at the welcome ceremony, Leuthard said Switzerland is a trustworthy partner for China.

She lauded the bilateral relations as being full of life, noting that the relations had reached the highest level in history last year when the two countries established an innovative strategic partnership.

Stressing that Xi’s visit will deepen the bilateral relations, Leuthard said the Swiss side is willing to discuss cooperation with the Chinese side in promoting China’s Belt and Road Initiative and other areas, and strengthening communication and coordination within the United Nations and other multilateral organizations.

The Swiss president also extended festival greetings to President Xi and the Chinese people on the approaching traditional Chinese Lunar New Year, also known as the Spring Festival, which falls on Jan. 28 this year.

The two heads of state will hold an official talk on Monday.