Chinese outbound investments linked to its One Belt One Road agenda would be a factor in the process of renminbi internationalization, analysts say.

Debts financed by Chinese companies on the overseas infrastructure investment deals of the OBOR policy would increase the liquidity of offshore renminbi use. Meanwhile, the ease of paying Chinese contractors in renminbi on these projects and the ease of trading in renminbi on the OBOR routes would also help the currency to be used more widely overseas, they say.

“A lot of the Asian countries around China are already settling the majority of their trade with China in RMB, such as Inner Mongolia, Taiwan and Singapore, and the improvement in trade networks with other countries should lead to much greater use of RMB in those places as well,” says Carr. 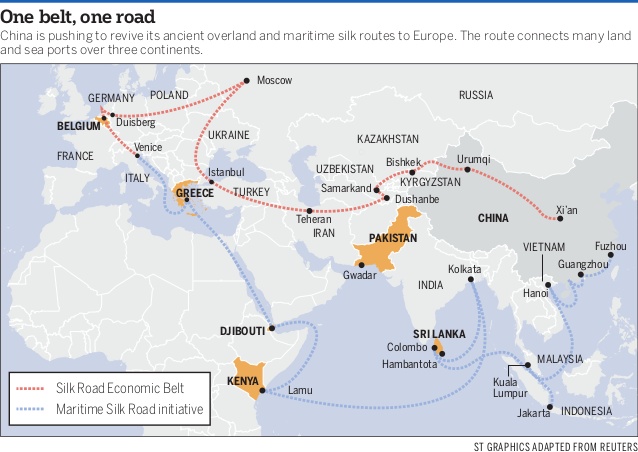 To achieve this integration, China has already deployed funds totaling around $100 billion, consisting of $40 billion for the Central Asia-focused Silk Road Fund, $50 billion for a new Asian Infrastructure Investment Bank, and $10 billion to the BRICS-led New Development Bank.

China started to drive forward its renminbi internationalization agenda after the financial crisis in 2008 when its foreign reserves started to lose value rapidly as a result of US quantitative easing.

It has since worked on building offshore renminbi centers to facilitate the international use of renminbi, so that one day the currency can become a new major reserve currency, to accompany the US dollar. Within this context, the structuring of investment deals in the OBOR policy package will greatly increase the liquidity of offshore renminbi.

Andrew Malcom, Head of Asia Capital Markets, at Linklaters, a law firm, said that the use of RMB is a win-win solution which makes commercial sense, because many of the countries involved in the OBOR initiative may find themselves exposed to too high exchange rate and hedging costs if they transact in their own currencies instead.

These costs could be reduced if RMB is used for settlement, because many of these countries will transact with China in the OBOR initiative, so using the domestic currency of one party could be cheaper for both.

“If RMB is adopted for trade and financial contracts this will inevitably drive demand for RMB debt as well as other RMB financing, hedging and investment products. Initially the demand would be primarily offshore, but as onshore markets continue to open, onshore access will increase in importance,” Malcom says.

Jinny Yan, a senior economist at Standard Chartered, says that bilateral trade between OBOR countries and China accounts for roughly a quarter of China’s total foreign trade, but bilateral trade and investment activity with these countries is likely to grow faster under the OBOR initiative.

Yan adds that as there are several resource-rich countries along the OBOR route, and as China is a major consumer and importer of commodities, interest in pricing commodities in renminbi is growing, in order to reduce over-reliance on the US dollar and avoid the risk of fluctuations in the dollar exchange rate.

Yan says her team estimates official funding from the AIIB, New Development Bank (NDB), the Silk Road Fund and China’s policy banks will potentially total $1 trillion over the next 10 years, creating big potential for the renminbi’s international use.

« Chinese President to Participate in G20, APEC Summits» Shandong Opens Gateway to China, the World, for Local SMEs after Talks