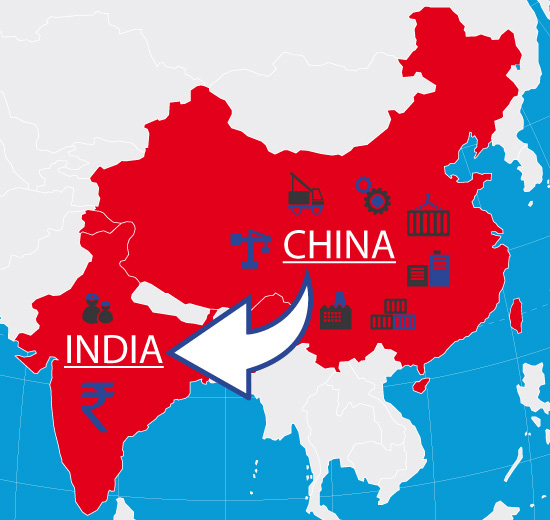 More foreign companies are moving their production lines to India due to its labor force and low management costs. But challenges of bureaucracy and lack of infrastructure still intimidate investors.

These toys are being made in a Chinese company in India for companies like Hasbro, Disney and universal studios. For decades these toys were made in China but Pals Plush decided to move its production to India 3 years back. Now 40 per cent of its manufacturing is done in India.

Seema Nehra is the Director of Pals Plush. She started this factory in Sri City in the South Indian state of Andhra Pradesh in 2012 after running factories in China for 15 years. She tells us that it’s the price advantage and abundance of labour that has been the draw.

“We are expanding in a big way in India. And I’m sure in the coming two three years we would be making much more in India than what we are making in China. We are able to offer price advantages to our customers. Soft toy industry is very, very labor intensive. And almost 50 to 60 percent of the product is the labor,” Nehra said.

Sri City is one of the industrial hubs that are fuelling India’s ambition of becoming a manufacturing hub. Situated on the border between the state of Tamil Nadu and Andhra Pradesh, Sri City boasts of infrastructure, connectivity and hand holding companies to get approvals and clearances.

Cheap and availability of labour might be the top reason for companies getting attracted to India, but its not enough. Ravindra Sannareddy is the Managing Director of Sri City. Even as the industrial hub has been successful in attracting many large companies to India, he says much needs to be done.

“We still have some infrastructure challenges in this country, whether it is last mile road connectivity to port concessions to airport concessions. So there is scope to improve some of these issues. Second, the skill development. While we have a young population, the education system in India is focused on degrees and certifications. I think the industries now need skills rather than degrees to make them successful factory workers,” Sannareddy said.

Chinese company ZTT is one of the biggest manufacturers of Optical Ground Wires. The company made 8 million US dollars investment in Sri City to start its manufacturing unit. In the next 3 years, it plans to double the investment and start exporting from India to other South Asian markets.

Chen Zhaofeng is the President and Director of ZTT in India. He says, despite the challenges, it’s a market that is worth taking the risk for.

“As a foreign company that is going to invest in India, the biggest challenge is rules and regulations and dealing with local laws. We had to cope with the local government. Water, electricity are a problem and we found Sri City,” Chen said.

India needs to create 10 to 12 millions jobs a year for its young population. That is the reason Indian Prime Minister announced a massive plan to make India a manufacturing hub.

Even though, there has been an increase in foreign investment in India but the numbers remain small. India is benefiting from the challenges China is facing. Blue collared workers are much cheaper in India compared to China and even as other markets saturate, India has a massive potential to grow.

But, it also has to up its game by getting its infrastructure and bureaucracy in order to ensure companies see it as an attractive place to do business.