China’s consumer inflation picked up last month, boosted by price gains for food and services, signaling demand in the world’s second-largest economy is stabilizing after accelerated fiscal stimulus and a year of interest-rate cuts.

The consumer-price index rose 1.5 percent in November from a year earlier, the National Bureau of Statistics said Wednesday, compared to the 1.4 percent median estimate in a Bloomberg survey and 1.3 percent in October. The producer-price index fell 5.9 percent, compared to a projected 6 percent drop, extending declines to a record 45 months.

“We expect inflation to rise going into 2016,” Julian Evans-Pritchard, China economist at Capital Economics Ltd. in Singapore, wrote in a report. He said he isn’t overly concerned by factory deflation because “with the price of domestic goods holding up better, many firms should actually benefit from these lower input costs.”

Inflation firmed with help from a 2.1 increase for services, while slower declines in imports signal demand is stabilizing after six central bank interest rate cuts since November last year and expanded government spending. The pickup still leaves room for additional easing, as CPI is forecast to rise at half of the government’s target this year, according to a Bloomberg survey. 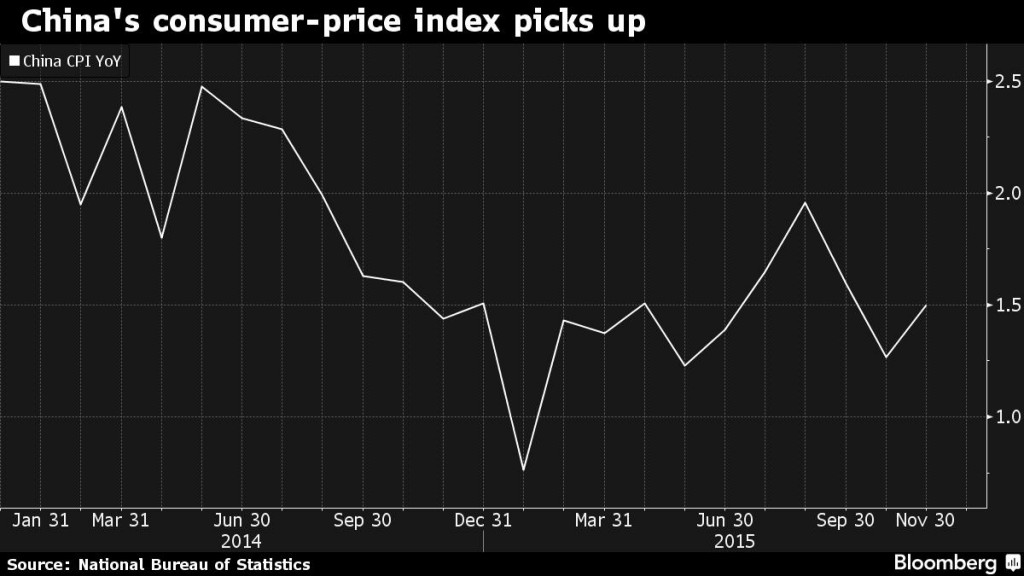 The increase for services was offset by a 1.2 percent gain for consumer goods. Food prices climbed 2.3 percent while non-food items rose 1.1 percent, continuing their rebound from January’s 0.6 percent gain that was the slowest in five years.

Rain and snow in northern China helped push up the costs of producing and transporting vegetables and fruits, according to an NBS statement released with the data.

While the better-than-expected CPI was due to food prices, there’s still been no significant change in more demand-sensitive items, indicating “there’s no clear sign of better domestic demand,” according to Zhu Qibing, a Beijing-based analyst at China Minzu Securities Co. He said producer prices won’t turn positive until the second half of 2016.

The pickup in vegetable prices will likely prove temporary, according to Xu Gao, chief economist at Everbright Securities Co. in Beijing. “The price pressure is still on the deflation side, and the government will further ease monetary policies.”

The Shanghai Composite Index closed 0.1 percent higher. The benchmark gauge has rallied almost 20 percent from its lows in August. China’s currency weakened for a fourth day against the U.S. dollar.

The People’s Bank of China on Wednesday reduced the onshore yuan’s daily reference rate to the weakest level in four years after data earlier this week showed bigger-than-estimated declines in exports and foreign-exchange reserves. The central bank led by Governor Zhou Xiaochuan has already cut its main interest rate to a record low and reduced the required reserves for the nation’s biggest banks.

The central government has also increased spending to add stimulus in recent months to help achieve their target for economic growth of about 7 percent this year. Fiscal spending jumped 36.1 percent in October from a year earlier to 1.35 trillion yuan ($210 billion).

“Taken together, price levels remained broadly low, leaving room for further easing by the central bank,” Chen and Orlik said. “The PBOC is likely to continue the easing cycle into 2016, with further cuts in interest rates and the reserve requirement ratio.”