BEIJING, Nov. 17 (Xinhua) — China accounts for 30 percent of global growth, it is the world’s second largest economy and the largest developing country, and the ripple effect of this positive energy will continue to create opportunities across the globe.

While the lingering fog of the international financial crisis has yet to clear, collective action for inclusive and robust growth — characteristics that define China’s own growth story — have emerged as guiding lights that can help counties and regions navigate these choppy economic seas.

These motions also featured heavily during the just-concluded G20 summit in Antalya, Turkey.

The G20 brings together the world’s major advanced and emerging economies, representing around 80 percent of world trade and two-thirds of the world population, to deliberate economic and financial policy issues.

The first G20 Leaders’ Summit was held in Washington, D.C. in the United States in 2008. Since it’s inception, it has played an integral role in promoting a more balanced, developed international financial structure.

Chinese President Xi Jinping said at a speech delivered at the summit that G20 members should not only address the immediate challenge by stabilizing growth, but also tackle the root cause by gathering momentum for long-term development. 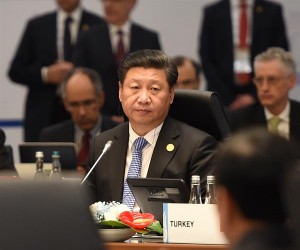 The febrile recovery following the 2008 crisis has been used by many as an example as to why improvements must be made to the current global financial administration. In fact, a system for enhanced collective dialog on action, driven by emerging markets and diversified growth engines, is already taking shape.

Again, we can see similarities with China policies — in this case open and shared development, two strategies expected to be outlined in the nation’s economic and social development blueprint, the 13th Five-year Plan (2016-2020).

With more than 100 million Chinese making overseas trips in 2014, economies are already reaping the benefits of a better-off Chinese populous, and out-bound tourism is showing no signs of slowing.

It is indisputable that the world would suffer should China slip into the depths of recession and no longer contribute around 10 percent to global export-import volume: China and the rest of the world must unite to address global challenges.

The projected growth path outlined in the five-year plan is China assuring the world that it is in for the long-haul; through thick and thin.

With inclusive programs, such as the Silk Road Economic Belt and the 21st-Century Maritime Silk Road, China is showing that it is committed to connecting regions and countries, while at the same time creating opportunities.

Another such program, the Asian Infrastructure Investment Bank (AIIB), will finance infrastructure projects in the Asia-Pacific region.

Add to this, the four proposals made by Xi at the summit, which included improved communication and coordination on macroeconomic policies, demonstrates that China is proactively spurring growth rather than trying to protect itself.

In the wake of the World Trade Organization (WTO) Doha negotiations that stumbled because complex issues could not be resolved, nations are now forming regional politically-charged trade blocks.

However, both the AIIB and the Belt and Road are inclusive, which explains why they are being welcomed globally.

China will host the 2016 G20 summit in the eastern city of Hangzhou on the theme, “Building an innovative, invigorated, interconnected and inclusive world economy.”

Promising greater commitment to economic innovation over the next five years, China is expected to take a more active role in global governance.

Yet, the remedies for growth prescribed by China demand interaction from the rest of the world. Much in the same way that development in China should be integrated with the wider global community.

It is only through a collective and united approach to global governance that this innovation system can be sustainable.