BEIJING, Oct. 19 (Xinhua) — China’s economy posted a 6.9-percent growth year on year in the third quarter of 2015, lower than 7 percent in the first half of the year, the National Bureau of Statistics (NBS) announced on Monday.

This is the first time the quarterly growth rate had dropped under 7 percent since the second quarter of 2009. 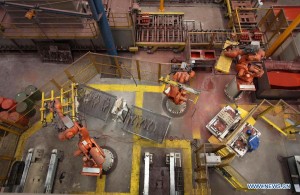 “Expectation of a U.S. interest rate hike prompted volatility in commodity prices, stocks and foreign currency markets. Many countries devaluated their currencies, putting more pressure on Chinese exports, one of the three pillars of China’s economic growth,” said Sheng at a press conference.

China’s exports growth dropped 7.9 percent year on year in the first three quarters to 17.87 trillion yuan, according to the NBS.