BEIJING—China’s first homemade jetliner is poised to make its commercial debut nearly a decade behind schedule, as a local airline took delivery of a regional aircraft that illustrates Beijing’s woes in getting its aerospace sector airborne.

Regional carrier Chengdu Airlines on Sunday received the first of the 30 new ARJ21 jets it ordered from state-owned Commercial Aircraft Corp. of China, or Comac. The ARJ21, dubbed the “Flying Phoenix,” will enter service after three months of trial operations, Comac said in a statement.

The ARJ21, or Advanced Regional Jet for the 21st century, can carry between 78 and 90 passengers for more than 2,200 kilometers, according to Comac, which described the delivery as a “major breakthrough” for China’s aviation industry.

Chinese officials originally set a 2006 deadline for the ARJ21’s commercial rollout but pushed back its debut several times due to repeated production setbacks. Similar troubles have plagued Comac’s push to develop a larger jetliner, the C919. A prototype of that 158-to-174 seater was completed in early November after years of delays.

The delays underscore how China’s commercial-plane makers have struggled to close the gap with western aerospace giants Airbus Group SE and Boeing Co. , despite strong state backing for what Beijing considers a project of national prestige.

“ARJ21 has been a waste of money,” said Keith Crane, an economist at Rand Corp. who has studied China’s aviation sector. “It has provided Comac, which inherited the project, with experience working with Western suppliers and with trying to get an aircraft certified, but those pluses are completely outweighed by the costs of the project.” Industry analysts estimate the ARJ21 racked up billions of dollars in development costs.

Comac didn’t respond to a request for comment on the ARJ21’s development and sales. In its Sunday statement, the firm said the ARJ21 project helped boost technological and developmental know-how in China’s aviation industry, groomed a new crop of aerospace professionals and “created advantageous conditions” for the more ambitious C919 project.

Chinese aerospace officials have previously given the ARJ21’s list price as $30.5 million, cheaper compared with its many rivals, though analysts say buyers were likely given significant discounts. The current list price wasn’t immediately clear.

Industry experts said the ARJ21 has little hope of breaking out of its home market amid stiff competition in a regional-jet market dominated by Canada’s Bombardier Inc. and Brazil’s Embraer SA. Russia’s Sukhoi Civil Aircraft Co. also makes a regional jet, while Japan’s Mitsubishi Aircraft Corp. will pose a challenge with its 70-to-90 seater that made its maiden flight this month.

The ARJ21 currently lacks U.S. and European certification, which means it can’t be exported or flown to major Western markets. The U.S. Federal Aviation Administration this year ended a shadow evaluation of the Chinese civil-aviation regulator’s ability to assess airworthiness—a bilateral process industry insiders said was fraught with discord over bureaucratic and technical matters. 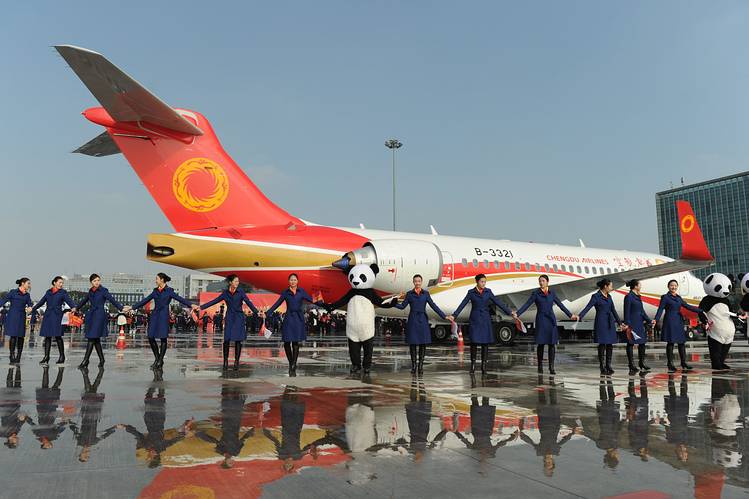 Comac is developing an ARJ21 variant with design changes that will bring the plane in line with U.S. standards, according to the FAA, which said it would work with Chinese regulators to “develop a path to work towards certification of the derivative model of the ARJ21 and, possibly, the C919.”

Still, Comac can be assured of sales to Chinese airlines, whose aircraft purchases are controlled by the government. Sunday’s delivery was the first on more than 300 orders for the ARJ21, the majority placed by Chinese airlines and leasing firms. Booming growth in domestic air travel would also help: Boeing projects China’s commercial airplane fleet to nearly triple to more than 7,200 aircraft by 2034, including demand for some 4,630 single-aisle planes.

“Internationalizing the ARJ21 and the C919 isn’t realistic at this point,” said Gao Yuanyang, an associate professor at Beihang University who studies China’s aviation industry. “Comac must first focus on the domestic market and gain acceptance from airlines and passengers, in terms of performance, maintenance and comfort.”

The ARJ21 marks China’s first attempt to build a commercial jetliner since Beijing scrapped the Y-10 project in the early 1980s. Since then a Chinese state-owned firm has developed the twin-turboprop MA60 passenger plane based on an old Soviet design, though the aircraft has accumulated tepid sales and a checkered service record marred by a number of accidents at home and abroad.

Though touted as a homegrown Chinese product, the ARJ21 is influenced by the McDonnell Douglas MD-90 and relies heavily on foreign technology, including avionics from Rockwell Collins Inc., engines from General Electric Co. and a wing designed by Ukraine’s Antonov State Co.

A consortium led by the state-owned Aviation Industry Corp. of China started developing the ARJ21 in 2002, as part of Beijing’s decadeslong effort to build an advanced aerospace sector capable of breaking the Airbus and Boeing duopoly.

Shanghai-based Comac, created in 2008, took over the project and oversaw the ARJ21’s first flight later that year, some three years behind schedule. Further delays ensued before China’s civil-aviation regulator certified the jet late last year, allowing it to operate domestically and in certain developing countries in Asia, Africa and South America that recognize the Chinese certification.

Chengdu Airlines, which currently operates narrow-body Airbus A320s, plans to operate the ARJ21 on domestic routes linking its headquarters in the southwestern Chinese city of Chengdu to destinations like Shanghai and Qingdao.