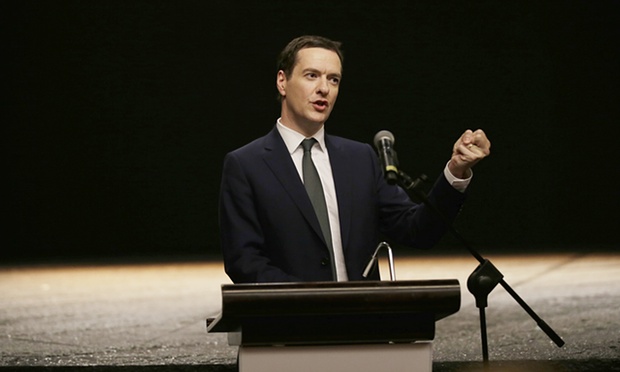 George Osborne has urged Chinese leaders to press on with economic reforms as he played down fears that China’s recent stock market turmoil and economic slowdown will endanger the global economy.

Last month’s stock market meltdown and disappointing economic data from China have fuelled concerns that the world’s second largest economy is slowing faster than its government is letting on.

However, speaking on Sunday the chancellor insisted that even with its economy slowing, China would continue to be “a massive source of growth going forward”.

“But put it in perspective. The Chinese economy is forecast to grow over the next five years in such a way that it will add to the world economy an economy the size of the United Kingdom at least. So the growth in the Chinese economy will be more than the entire British economy at least in the coming five years.”

Speaking on the first day of a five-day tour of China, Osborne sent a message to his Communist party hosts, who are grappling with how to manage their country’s economic transition while avoiding a hard landing. “When you look at what China is doing at the moment, I think that the message that I would say to China is: ‘Carry on with the reform, carry on with the change you are making,’” Osborne said.

“It will be of course challenging – it can’t be anything other than challenging when you’ve got the world’s second largest economy and you’ve got 1.3 billion people who are undergoing this big change … so you do get things like movements on stock markets.

“But it is important to keep our eye on the bigger picture as well – on the bigger prize – that this period of economic reform can lay the foundations for Chinese prosperity for decades to come. So we are very support of the economic reforms that the Chinese government has talked about and are now starting to [put into practice].”

Chinese authorities face the challenge of reforming the country’s vast economy away from over-dependence on investment and exports and towards more domestic, household consumption. They are also seeking to gradually take the heat out of overvalued property and share prices.
Reforms have included moves to rein in debt-fuelled investment, from large infrastructure projects to individuals buying property and speculating on the stock market.

But the International Monetary Fund warned recently that further structural reforms will be needed to make the Chinese economy more open, and it urged China to press on with plans to move to a more market-based financial system, to reform state-owned enterprises and move to an effectively floating exchange rate.

Osborne’s trip will see him travel to four Chinese cities, starting with Beijing and then Shanghai, Chengdu and Urumqi in the far north west.

On Monday he is due to meet senior Chinese leaders in Beijing while on Tuesday he will visit the Shanghai stock exchange, the epicentre of the summer’s market chaos.

“I am going very deliberately to the Shanghai stock exchange and I’m going to talk there specifically about the financial markets and the events of the summer,” Osborne told an audience of high-tech entrepreneurs in Beijing.

“Of course there have been ups and downs. But in our estimation, the spillover effects – the impact of that on other financial markets – has been relatively limited.”

Now, officials in both China and Britain are vowing to push for a “golden decade” of relations.

“We want Britain to be China’s best partner in the west and that is what brings us here today,” Osborne said on Sunday.

A series of major Chinese investments in Britain are expected to be unveiled next month when president Xi Jinping travels there next month on his first state visit to the country.

Treasury minister Jim O’Neill, who is travelling with Osborne in China, said the country’s continued slowdown was “very predictable” and that he remained upbeat about the prospects of what he called the “New China”.

“Of the four ‘Bric’ countries, so far this decade China is the only that has grown by more than I assumed it would do at the start of the decade,” said O’Neill, a former Goldman Sachs economist who created the bric acronym in 2001.

« India Likely to Ratify WTO Trade Pact by November» China And India: Are Their Interests Converging?