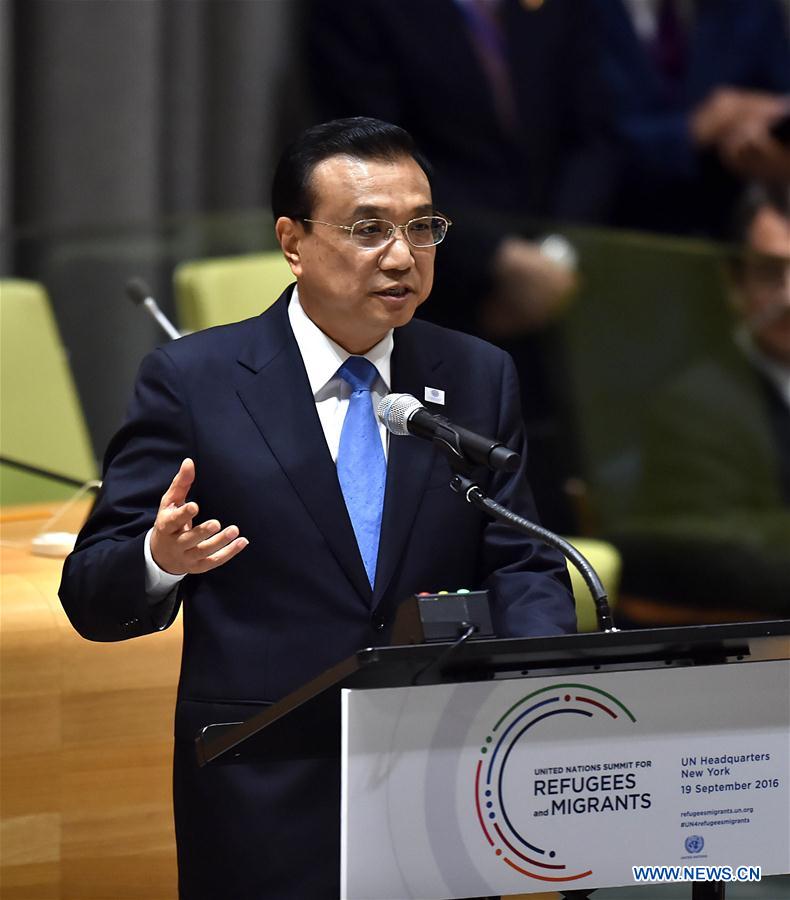 The aid, which is on top of China’ s previous pledges, would go to some relevant countries and international organizations.

Li made the statement while addressing the Summit for Refugees and Migrants of the ongoing UN General Assembly that opened earlier last week.

“We are committed to shouldering our responsibilities compatible with our abilities, and this is an act of justice,” Li said.

“We did what we could to help, even when China was poor,” he said, adding that “now China has made great progress in its economy, but we still are a developing country.”

China is mulling further supporting measures, considering setting aside a portion of the China-UN peace and development fund to support developing countries in their efforts to address issues concerning refugees and migrants, Li said.

The issue of refugees and migrants is a humanitarian crisis, testing human conscience, the premier said.

The problem not only affects the development of countries that are concerned, put regional peace and stability in jeopardy, but also is a drag on global economic recovery, influence international order, and leave opportunities for terrorists to explore, he said.

While noting that the issue of refugees and migrants is a global one that “no country can stay immune to,” the premier urged the international community to “act strongly to respond.”

“We are living in a global village, every life is precious, and the dignity of every person deserves being upheld,” Li said.

While paying attention to the refugee crisis in Europe, the same attention should go to Syria, Afghanistan, Somalia, South Sudan and other countries, he added.

The Chinese premier called for enhanced international cooperation to address the issue, and stressed the importance of formulating and implementing a comprehensive solution under the UN framework.

He also underscored the coordinating role of the UN Refugee Agency (UNHCR) in solving the issue concerning refugees and migrants.

Li pointed to “mobilizing fund and relief to ensure the basic daily need of the refugees” as the top priority, and called for a fight against human trafficking and terrorism.

In addressing the issue, “history and national circumstances must be taken into account, and each should shoulder its respective responsibilities,” the premier said.

The problem cannot be solved without the efforts of the countries where the issue of refugees and migrants is started, he said.

While noting this is the first UN meeting on large movement of refugees and migrants since the bloc’ s founding, Li hopes the meeting would be a new start for all parties to reach consensus and join hands to solve the issue.

On the sidelines of the UN conference, the premier will meet with UN Secretary-General Ban Ki-moon and hold talks with leaders of some countries.

During his stay in New York, Li is also expected to hold a bilateral meeting with U.S. President Barack Obama, meet local figures in the fields of economy, finance, think tanks and media, and attend events held by institutions including the Economic Club of New York.

This year marks the 45th anniversary of the restoration of China’s seat in the UN.