For all the discouragement about the slowdown in China’s economy, at least one part of it is producing notable returns for some investors in U.S. exchange-traded funds: technology.

While the shift may happen slowly, investors are already moving in on the trend. Ahern’s fund has jumped 13 percent this year, the best performance among three China tech-focused ETFs, while the MSCI China Index slumped 7.5 percent.

The Communist Party last month signed off on a new five-year plan. While the details won’t be released until March, officials signaled in a communique after the meeting that consumption and services will be at the center of the country’s economic strategy. China has already established a plan to boost expansion by integrating old-growth industries with the Internet. MSCI Inc. said last week it will add 14 U.S.-traded Chinese stocks to its largest indexes as part of an effort to broaden the coverage of its gauges, to which an estimated $9.5 trillion of assets are benchmarked. 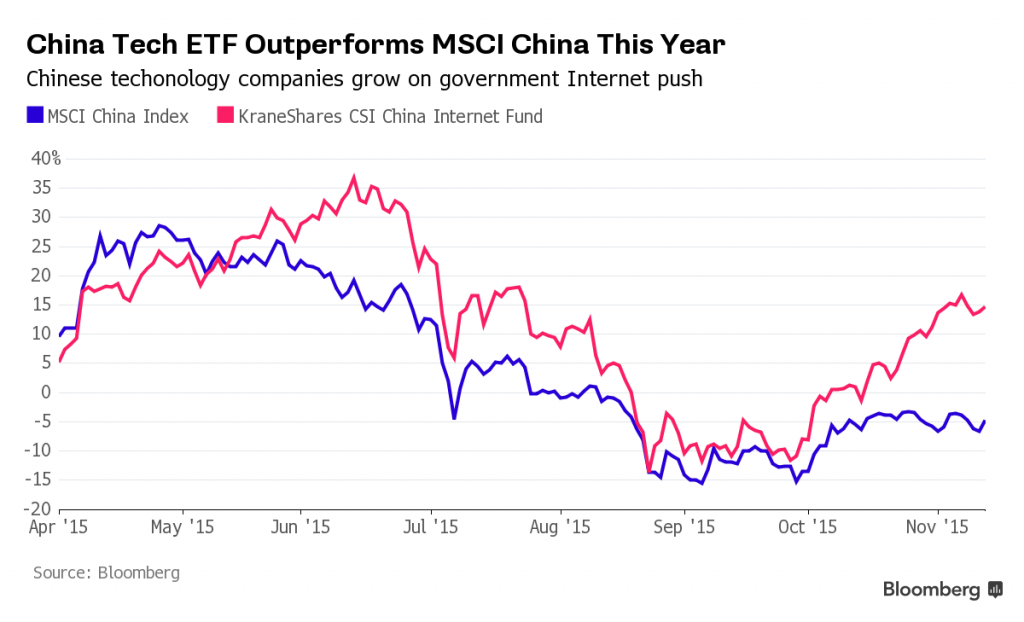 The KraneShares technology fund’s returns exceeded those of the Guggenheim China Technology ETF and the Global X NASDAQ China Technology ETF, each of which has gained at least 4 percent this year. The fund also doubled the performance of the Technology Select Sector SPDR Fund, the biggest tech ETF tracking U.S. companies including Apple Inc. and Microsoft Corp, and had the fifth-highest return among all 52 of them, according to data compiled by Bloomberg.

The fund providers “saw something that literally wasn’t anywhere, in any ETF and thought, that’s a good opportunity, because these big ETFs are missing this,” Eric Balchunas, an analyst with Bloomberg Intelligence said by phone. KraneShares “was way out ahead in a smart move, and now the big guys are maybe catching up to them,” he said.

Economists surveyed by Bloomberg forecast 6.9 percent growth in China’s gross domestic product in 2015, the least in 25 years. Consumption contributed to 58.4 percent of GDP in the first nine months of this year, while the pace of services industry expansion quickened, official data showed last month. As the old drivers of China’s economy fade, the government has pledged to support growth through a program dubbed “Internet Plus,” through which web companies will be linked with manufacturers.

While old-growth industries have slowed and services remain “relatively buoyant,” underlying concerns about China including the quality and reliability of government economic data, shadow banking and surging government debt could derail the revival in the country’s equities, said Nicholas Spiro, managing director at Spiro Sovereign Strategy in London.

Technology stocks including Baidu Inc., NetEase Inc., Alibaba and JD.Com have driven a 26 percent gain in the Bloomberg China-US Equity Index from this year’s low in September. During the second quarter, 23 of 31 tech companies in the gauge exceeded earnings estimates and 20 beat sales projections.

China added 31 million Internet users last year for a total of 649 million, while mobile Internet users grew by 56 million to 557 million, according to a China Internet Network Information Center report. The country’s Internet penetration rate is still only 48 percent, underscoring potential for future growth. For comparison, 87 percent of the US population has Internet access, data compiled by the World Bank show.

“Even in a slower-growth environment, there’s so much opportunity in China for well-run companies to take advantage of what it is — a fundamentally changing and dynamic economy,” Derrick Irwin, manager of the $3.5 billion Wells Fargo Advantage Emerging Markets Equity Fund, said in an interview with Bloomberg Brief published on Nov. 12. “If we look across the tech space in China, we think there’s some very good long-term opportunities there.”