China Seeking to Link Iran to Its New Silk Road 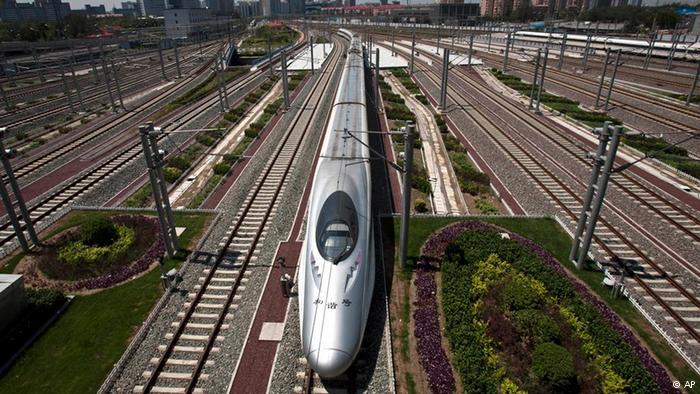 Iran is arguably one of China’s closest partners in the Middle East. And with economic sanctions on Tehran set to be eased, DW examines China’s latest proposal to integrate Iran into its New Silk Road Initiative.

Seeking to capitalize on the easing of international sanctions on Iran, China’s railway authority has proposed a high-speed rail line for both passengers and cargo connecting the country’s northwest region to West Asia via Central Asia, according to state-run newspaper China Daily.

The line would be complementary to the existing railway network in the region, which mostly runs southeast to northwest toward Moscow, CRC chief engineer He Huawu was quoted as saying. What’s more important, he argued, is that it could get rid of the incompatibility between the region’s wide-gauge track systems (1.52 meter) and the 1.435-meter standard track adopted in China and most other parts of the world.

A single rail line relying on a uniform gauge would fix the problem of trains waiting for days at certain border crossings to have their gauges changed, said the CRC engineer, adding that a passenger train using the suggested line could run at up to 300 km/h (186 miles per hour), while a container train could run at 120 km/h.

One Belt, One Road

The CRC proposal is just the latest in a series of plans designed to expand China’s economic connectivity – and political influence – across much of Eurasia through investment campaigns and infrastructure projects such as roads, rail links, airports and resource pipelines.

“For China, the opportunity to build high-speed railways in other countries is strategically attractive as part of Beijing’s efforts to transform the economy away from low-cost manufacturing,” Rajiv Biswas, Asia-Pacific Chief Economist at the analytics firm IHS, told DW.

Such projects are part of China’s One Belt, One Road (OBOR) initiative, namely the Silk Road Economic Belt and the 21st Century Maritime Silk Road, which aims to enhance connectivity between China, Central, Southwest and Southeast Asia, as well as Russia and Europe.

While yet to be officially endorsed by Beijing, the CRC proposal comes at a key moment as international economic sanctions on Iran, one of world’s top oil producers, are expected to be lifted in 2016.

“With Iran being one of the world’s largest emerging market economies as well as a key economy in the Middle East, the strengthening of economic and logistical connectivity between the two countries will also boost China’s geopolitical influence on Iran.

“From an energy security perspective, Iran has an important role to play in China’s future energy security, as a major long-term source of supply of oil and gas,” said Biswas.

In order to fully understand the potential impact of the proposal, it’s worth taking a broader look at the state of Sino-Iranian ties.

Iran is considered one of China’s closest allies in the Middle East, with significant political and economic ties going back many years.

“China has maintained its trading relations with Iran throughout the sanctions, and Chinese companies are heavily invested in a number of industries, ranging from consumer goods through auto to energy,” Michal Meidan, a China expert at UK-based think tank Chatham House, told DW.

The energy factor has played an essential role in the relationship. Flynt Leverett, a professor of international affairs at Penn State University, points out that while China has worked hard to diversify its foreign sources of oil, Iran has remained one of China’s top oil suppliers for over a decade – a development likely to continue as China’s demand for oil increases.

Iran once accounted for up to 13 percent of China’s oil imports. But they dipped considerably under international sanctions, causing Iran to slip from being China’s third-largest supplier to its fifth – after Saudi Arabia, Angola, Russia and Oman. Yet ever since the historic July 2015 nuclear deal was announced, imports have gradually risen, currently representing around 9 percent of total Chinese crude oil imports.

In fact, so far this year, Iran’s oil exports to China have averaged around 573,000 barrels per day (bpd) – higher than the 2014 average of roughly 555,000 bpd, said Leverett, who is also author of “Going to Tehran: Why America Must Accept the Islamic Republic of Iran.”

More recently, a sizable portion of Iran’s earnings from oil exports to China have been deposited into Chinese banks. “Even with sanctions relief, a significant share of these deposits – probably in the tens of billions of dollars – will not be repatriated to Iran. Instead, this money will remain in China, where it will fund ongoing Iranian purchases of Chinese goods,” said Leverett, referring to another significant aspect of Sino-Iranian ties.

Besides becoming arguably Iran’s most important international economic partner in recent years, China has also emerged as the main great power alternative to the United States in Tehran’s strategic calculations, as Leverett indicates.

Beijing’s view of Iran as a historic and cultural power in the Middle East has also contributed to both sides seeking to deepen relations, including arms sales and strategic cooperation on an expanding range of issues such as Afghanistan and Syria.

“China has long been an important military supplier to Iran, while China’s status as a permanent member of the United Nations Security Council makes it an essential diplomatic reference point for Tehran,” said the expert.

Moreover, once the UN sanctions are lifted, Iran will be also eligible to apply for full membership in the Shanghai Cooperation Organization, as Moritz Rudolf, a research associate at the Germany-based Mercator Institute for China Studies (MERICS), told DW.

However, Beijing seems to tread carefully when balancing its relationship with Middle Eastern states. “Despite a standing invitation, Chinese President Xi Jinping has yet to visit Iran, partly because of the political sensitivities about heading to Tehran before a trip to Saudi Arabia,” Andrew Small, a fellow with the Asia program of German Marshall Fund of the United States, told DW.

But the Iranians have also raised concerns, particularly about a potential Chinese dominance of their economy as well as a “flood” of imported Chinese goods, said Meidan.

“And since Chinese companies have slowed some of their investments in the energy sector to avoid US sanctions, Iranian officials have also canceled a number of Chinese upstream projects,” added Meidan, who is also director of independent research consultancy China Matters.

A mixed blessing for China

But the greatest challenge to the relationship yet may arise from ramifications of the nuclear deal. Beijing’s political and security links with Tehran had benefited from Iran’s long-standing hostile relations with the United States and its tensions with Europe in more recent years. But there are fears that China’s position may now be undermined by a potential influx of Western companies in sectors where Iran’s isolation had given China privileged access.

“China is keen to expand its investments in the country considerably as it opens up, but Iran will be careful in choosing its partners – not least in the energy sector, where more technically capable western energy majors are still often seen as preferable partners,” analyst Small told DW.

Professor Leverett has a similar view. “While sanctions relief will create more economic openings in Iran for China, it will also generate more international competition for Chinese entities seeking opportunities to do business in or with Iran,” he said, adding that this is why China and Iran are unlikely to develop a “privileged” relationship in the near future.

So what role could the proposed high-speed rail link play? China is looking to Iran as a location for investment, transit, and as an emerging market. And given the increasing levels of competition expected from 2016, such a rail link would be a critical step towards integrating Iran into China’s “New Silk Road” initiative, say experts.

“Among China’s prospective partners, Iran is comparatively unique in the sense that geography makes it important to realizing both the essentially land-based New Silk Road Economic Belt, as well as the Maritime Silk Road,” said Leverett.

Dr. Hui Ching, Research Director at the Hong Kong Zhi Ming Institute agrees. In the long run, he argues, the construction and operation of the railway would meet not only China’s strategic goals, but also its geopolitical interests and economic needs.

“Given the US, its military alliance and its diplomatic collaborations in the Asia-Pacific, Beijing is now looking for markets, resources and strategic partners in both Central Asia and the Middle East. China’s western development is a logical choice, and inevitable in the coming decades,” Hui told DW.

Analyst Meidan is also of the view that the proposed rail link – which seeks to place China and its goods at the heart of an Eurasian sphere – would open new markets for Chinese companies and employees.

And as economist Biswas explains, the rail line would also help accelerate economic development along the entire rail corridor by linking up the regional economies and trading commodities, intermediate goods and finished products with both China and the EU.

But the rail link proposal still has major hurdles to overcome. As analyst Hui points out, Beijing first needs to demonstrate it is actually interested in building the rail line. In addition, the suggested system is yet to be tested by commercial measures. For instance, Hui warns that given the railway’s length along with its construction and running costs, the number of passengers could be well below the acceptable level.

And then there are security concerns. “The single-line railway could easily turn into a target for extremists or militia. It is still unknown whether China has the military strength and determination to protect such railways by the use of force,” Hui said.

MERICS analyst Rudolf is also skeptical. “It will be very difficult to realize this project, especially since it would stretch across many unstable countries in Central Asia like Kyrgyzstan and Uzbekistan. In addition, relations among the Central Asian countries are very difficult.”

Analysts agree that if Beijing does go ahead with the project, it will not be completed rapidly, mainly due to the lead time for preparations – the need to wait for sanctions to ease as well as technical factors such as feasibility studies, regulatory approvals and visas.

In the end, it seems that a lot will depend on how much high-level support the project attracts. “If President Xi actually travels to Iran in the near future and an initial agreement on high-speed rail connectivity becomes a key ‘deliverable’ for his visit, the project could gain momentum relatively quickly. Without such high-level attention, it would surely take longer,” said Leverett.