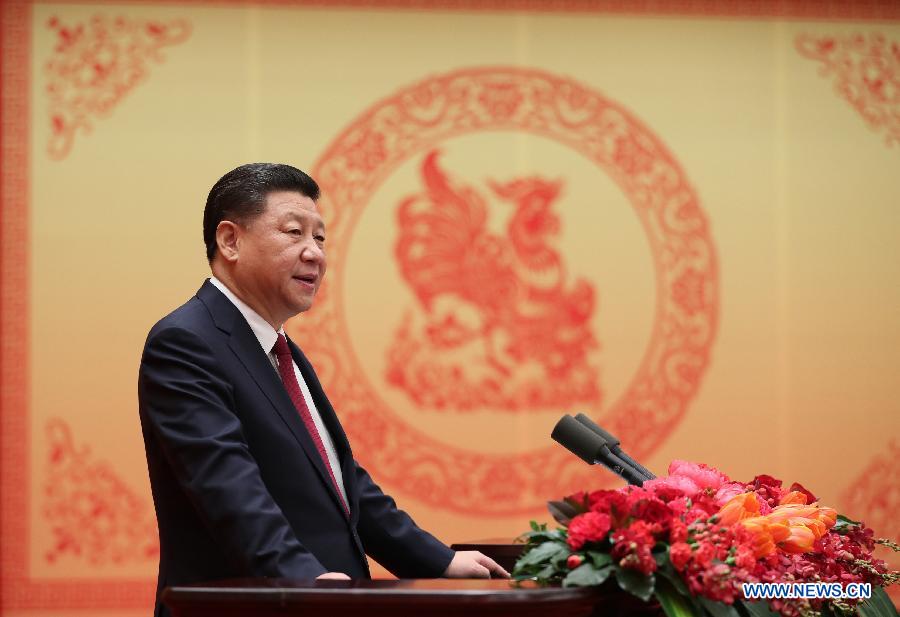 The President’s latest appeal for diligence and hard work has sparked heated discussion and spread inspiration and confidence across the nation.

Xi Jinping, who is also general secretary of the CPC Central Committee and chairman of the Central Military Commission, extended Spring Festival greetings to all Chinese Thursday at a reception in Beijing on behalf of the Communist Party of China (CPC) Central Committee and the State Council.

The reception was presided over by Li Keqiang. Other leaders including Zhang Dejiang, Yu Zhengsheng, Liu Yunshan, Wang Qishan and Zhang Gaoli were also present.

Addressing the event, Xi lauded China’s continued economic growth as well as the deepened reform it underwent in 2016, pointing to improved lives of the people, advanced rule of law and strict governance of the CPC, as well as progress made in the war against poverty.

An additional 10 million people shook off poverty last year, and China aims to help at least another 10 million become members of the well-off society this year.

For decades, poverty alleviation has been a top priority on China’s policy agenda. Just this week Xi said, during an inspection tour to north China’s Hebei Province, that fighting poverty is the fundamental task in building an all-round moderately prosperous society.

But he said poverty alleviation is getting more and more difficult as it nears the end.

His words were echoed by Tang Jianzhen, an official in charge of poverty alleviation and development with the Henan Mongolian Autonomous County in northwest China’s Qinghai Province.

“Although we managed to get ourselves off the national list of impoverished counties, the task to ensure all residents take their rightful place as citizens of a well-off society remains daunting,” he said, “We should not feel at ease now.”

In his address, Xi also stressed that China highly values true affection and righteousness. He said everyone should treat others with honesty and sincerity, and be open and above board in life.

He also called on the nation to salute those diligent, brave Chinese as well as the nation’s heroes, model workers, veterans and all who contribute to the country’s development.

“The Chinese people have great dreams, but also have a great spirit to work hard and endure hardship to realize such dreams,” Xi said.

He said he hoped that under the leadership of the CPC, all of the people in the country can roll up their sleeves to work hard for the goal of building a moderately prosperous society, achieving the great rejuvenation of the Chinese nation, and building a community of shared destiny for all humanity.

“It is through hard work and training that our national team did so well at the Rio Olympics,” said Shi, who had coached world number one Ma Long early in his career.

“Not just sports, there is nothing you could achieve without hard work. There are simply no short cuts,” she said.