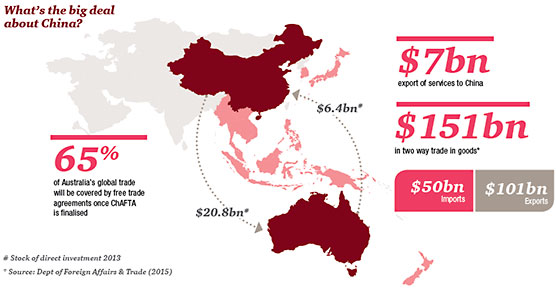 The China Free Trade Agreement will be the biggest single policy expense in today’s budget update, costing around $4 billion over the four-year budget period, however it is not clear whether the government will seek to offset this with savings elsewhere in the budget.

The agreement hits the budget bottom line because Australia is slashing the tariffs it charges on the $60bn of Chinese goods imported every year.

Negotiations on the agreement were well advanced by the time this year’s budget was concluded so a provision was made in the budget’s contingency reserve for the hit to the budget bottom line, however it was not listed among the policy decisions.

Australia’s free trade agreements with Japan and Korea were treated the same way in the budget when they were close to completion.

The China Australia free trade agreement is an important reform and is expected to bring economic benefits offsetting the cost in the long-term, however budget rules dictate that the immediate negative impact on the budget should be balanced with savings elsewhere in the budget.

The budget update is expected to show cumulative deficits over the next four years climbing from the $82bn predicted in the May budget to at least $115bn as a result of weak wage growth and falling iron ore prices.