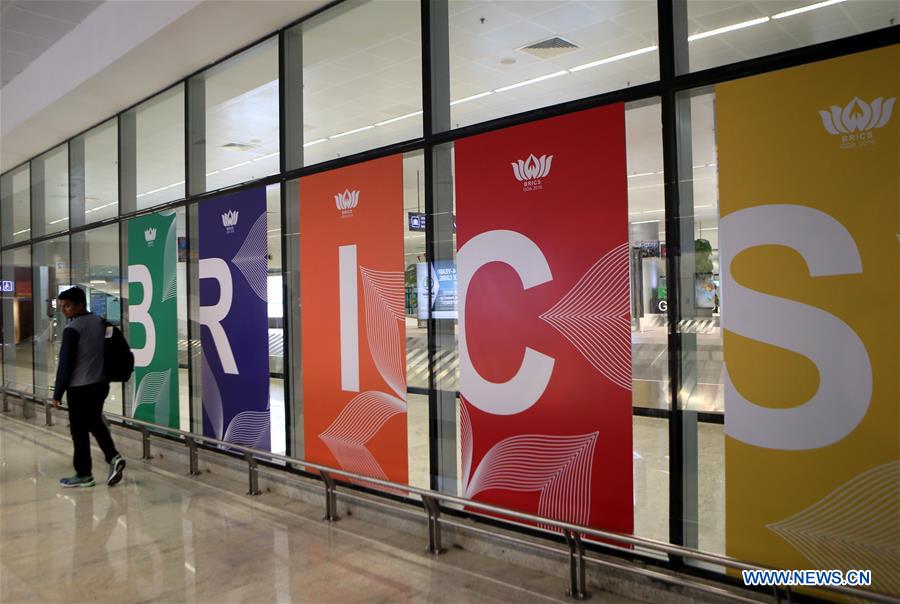 Over the weekend in the coastal Indian state of Goa, the New Development Bank has become a buzz phrase as BRICS leaders gathered for their annual summit here amid high hopes that the bank could provide new momentum of growth and cooperation between BRICS countries.

The bank, formally opened in July last year in Shanghai, has witnessed remarkable progress. Its first loan projects have been approved, and first bonds issued to raise funds for clean energy projects in member states.

“I believe the bank is going in the right direction,” said Indian economist D.K. Ravi in a recent interview with Xinhua. “When it was launched, the bank was expected to issue its first loans early 2016 and indeed it has approved its first package of loans worth 811 million U.S. dollars in April this year.”

Three months later, the bank announced that it had successfully issued its first bonds worldwide to raise funds for clean energy projects in member states. The five-year green bonds, denominated in the Chinese currency renminbi or Chinese yuan, are worth 3 billion yuan (449 million U.S. dollars).

The progress took place despite slowing growth rates experienced by BRICS countries in recent years amid a plunge in commodity prices and a sluggish global recovery. According to World Bank forecasts, the Russian and Brazilian economies may shrink by 1.2 percent and 4 percent respectively this year and South Africa may grow at a meager 0.6 percent.

Experts are hoping that the New Development Bank could further consolidate the positive economic signs.

The bank can provide much-needed financing for large infrastructure development projects in BRICS countries, which would give a significant boost to social development and economic growth, according to Zhang Yansheng, secretary-general of the Academic Committee of China’s National Development and Reform Commission (NDRC).

The World Bank estimated that the financial gap for developing countries in upgrading their infrastructure has reached up to 1 trillion dollars. However, the private financial sector is usually unwilling to fund large infrastructure development projects, as such investments are large in scale and require a longer payback period, said Zhang.

“This is where the New Development Bank comes in,” he told Xinhua in a telephone interview. The logic behind the bank is that as a policy bank, it can provide the development financing for such projects although they might not be profitable in the short run, he explained.

“It’s like injecting blood to the development of BRICS countries,” said Zhang. “Once the policy financing reaches a certain level, the private financial sector will also come in, further accelerating regional economic and social development.”

“If last year the main issue discussed was the readiness of our countries for creating institutions, then in the end of September there was a meeting in Goa, and there the discussion centered about what other institutions BRICS need,” said Sergey Karatayev, deputy head of the Center for Economic Research at the Russian Institute of Strategic Studies.

For example, India said that an institution is needed for scientific research and formulating common expert opinion of the BRICS countries; there is also discussion about the creation of a rating agency, according to the expert.

“These issues have been touched upon before, but now they have emerged again mainly due to the successful work of the bank,” he added.

Experts are also hoping that the NDB will push forward a reform of global financial governance.

BRICS countries have shown that they are also capable of creating international institutions which can work successfully on the basis of principles different from other such bodies, said Karatayev.

A distinctive feature of the NDB is the absolutely just distribution of votes between members, “each of them have equal voting rights, different from the quota system based on the role of this or that member,” he said.

Despite the current limited capabilities of the bank, Karatayev said what’s more important is to show that the bank is capable of investing in new directions and of formulating its own policy, which will eventually influence activities of other banks.

Echoing his view, Zhang Yansheng said the International Monetary Fund and the World Bank, created at the end of World War II over 70 years ago, can no longer meet the needs of developing countries.

“The New Development Bank, along with other policy financial institutions, is a new force in global governance — it might lack experience and make mistakes, but they are an emerging force after all.”