BRICS Leaders Meet in Turkey ahead of G20 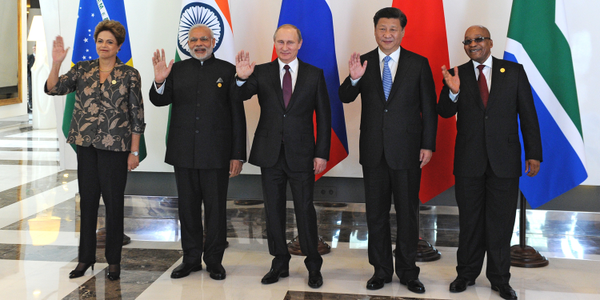 The five BRICS nations have condemned the recent terrorist attacks in Paris, Beirut and Ankara and raised concerns over the pace of the global economic recovery.

“The BRICS countries contributed significantly to the expansion of world trade, industrial and technological cooperation,” a Kremlin statement quoted Russian President Vladimir Putin as saying at the meet.

The global economic situation hasn’t improved since the group last met in July in Russia during the 7th BRICS Summit.

The BRICS leaders “compared approaches on key issues on the agenda of the G20, evaluated the implementation of the agreements reached at the July summit of the BRICS in Ufa and outlined guidelines for our future work” said the Kremlin statement released after the meet.

“Our countries are committed to working for reducing risk that the global economy continues to face,” said Brazilian President Dilma Rousseff in Antalya.

BRICS leaders said they prioritise “the construction of a truly open global economy, increasing and diversifying trade, transport, technological exchanges, reforming the global financial system, including increasing the role of developing countries in the IMF”.

Brazil, President Rousseff said, “will continue to prioritize investments in infrastructure, to reduce the volatility of global markets, the need for reform of financial institutions and the fight against poverty and inequalities as important issues for developing countries” at the G20.

BRICS countries “will continue to be a positive force for the resumption of global growth in the coming years” she asserted.

The five BRICS leaders on Sunday discussed developing agreements aimed at accelerating global economic growth and reiterated demands for one of the most difficult problems in global governance: IMF reforms.

BRICS have criticised the delays in changes at the IMF to give emerging economies more equal representation as “unjustifiable” and urged the G-20 to consider alternatives.

The newly operational $100 billion BRICS Bank and $100 billion Monetary Fund “will enable our association to carry out their own large, strategically important cooperation programs” said the Russian statement.

Brazilian President on Sunday called the operationalisation of the BRICS Bank and the Monetary Fund as “very significant” results achieved by the bloc.

Indian Prime Minister Narendra Modi said at the meet that India will focus on building “responsive, inclusive, collective solutions” during its BRICS Presidency that begins next year.

“India attaches the highest importance to BRICS. We are honoured to assume the Chairmanship of BRICS from February 1, 2016 and build on the great work done by other members,” Modi said.

“The New Development Bank, the Currency Reserve Arrangement, Strategy for BRICS Economic Cooperation – these are clear evidence of our vision and our resolve. Together, we can also give shape to G20,” he stressed.

“We are pleased that China takes over the Presidency of G20 in December 2015. We assure China our full support,” Modi added.

The BRICS countries have launched a $100 billion development bank, with its headquarters in China and with India holding its first rotating presidency. Russian President Putin noted on Sunday that the BRICS New Development Bank will start financing production technology and infrastructure projects beginning early 2016.

In Turkey, the deadly Paris attacks which killed 129 people, cast a shadow over preparations for the two-day G20 Summit that begins on Sunday. French media reports on Sunday quoted Finance minister Michel Sapin as saying France wants “concrete measures” against terrorism financing at the G20 Summit.

“We all understand perfectly well that coping with the terrorist threat and helping millions of people who have lost their homes, is possible only by combining the efforts of the entire world community,” Putin said at the BRICS meet on Sunday.

“As for the threat of terrorism, we have all seen the horror that took place in Paris. We sympathize with the people affected. We always stand for joining efforts to effectively deal with the terrorist threat,” the Russian president added.

“We stand united in strongly condemning the dreadful acts of terrorism in Paris. We express our deepest sympathy and support to Russia for the loss of life in Sinai. Ankara and Beirut are also reminders of terror’s growing spread and impact,” Modi said.

Putin met his BRICS counterparts two weeks after a suspected bomb attack on a Russian airliner that killed 224 people in the Sinai Peninsula.

During the meeting with his BRICS counterparts, Putin stressed on Moscow’s position that fighting terrorism “must be in strict accordance with the Charter of the United Nations, based on international norms and respecting the sovereign rights and legitimate interests of each state. These basic principles are reflected in the adoption this year of the document – Declaration of the BRICS in Ufa”.

World leaders will huddle in the Turkish capital over the next two days amid growing worries about the state of the global economy.

The eurozone economy grew by just 0.3 per cent in the third quarter of the year.

US stocks capped their worst week since August amid concern growth remains uneven as policy makers consider raising interest rates as soon as next month.