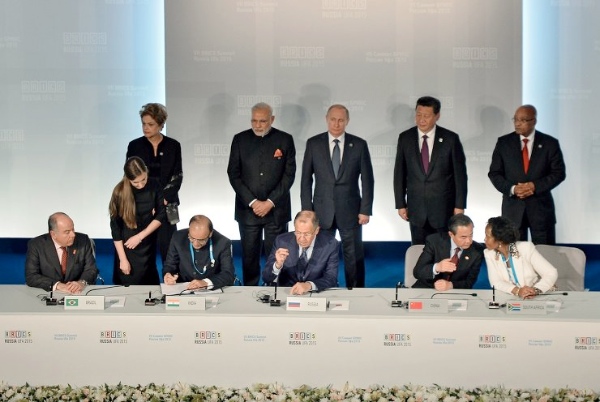 “The NDB, as per its mandate, is building partnerships with major banks in its member countries. Cooperation with CCB is important for us, given the key role it plays in infrastructure financing,” said NDB President Kundapur Vaman Kamath in an emailed statement to The BRICS Post.

“The MoU signed today will provide our two institutions with a framework for collaboration in several areas including bond issuance, joint financing and information exchange. I look forward to a long and mutually beneficial partnership,” Kamath added.

The China Construction Bank is planning to support the BRICS Bank with adequate credit lines and a commitment to invest in the new lender’s first financial green bonds.

The BRICS bank has said clean energy will be part of its core focus.

“Kamath expressed confidence that with CCB’s support, NDB should be in a good position to issue Green Bonds in the next few weeks,” said an official statement issued by the New Development Bank.

China Construction Bank Chairman Wang Hongzhang said the foundations of the BRICS Bank is crucial for financial cooperation between the BRICS and other emerging economies.

“The foundation of NDB is of strategic importance to the economic and financial cooperation between BRICS countries, other emerging economies and developing countries. NDB’s support will enable these countries to remove bottlenecks faced in financing infrastructure and sustainable development projects and provide a strong momentum to their economies,” Wang said.

“Common business focus has made CCB and NDB the ideal match for each other. The signing of this MOU would definitely consolidate the strategic partnership between the two banks,” he added.

The BRICS Bank announced its first set of investments in April this year.

The New Development Bank, which started in Shanghai last year, is made up of BRICS member nations — Brazil, Russia, India, China and South Africa.

The BRICS nations account for about a quarter of global economic output.

China and India are among the world’s fastest growing large economies.

The $100 billion NDB will compete with institutions where the US has considerably more influence—organizations such as the World Bank and the International Monetary Fund.

The agreement was signed by the bloc’s five members — Brazil, Russia, India, China and South Africa — on July 15 last year during the sixth BRICS summit.

The bank has an initial authorized capital of $100 billion.

Its initial subscribed capital of $50 billion will be equally shared among the founding members.

It has a three-tier governance structure — a board of governors, a board of directors, a president and vice presidents.

An African regional center of the bank will be based in Johannesburg, South Africa.