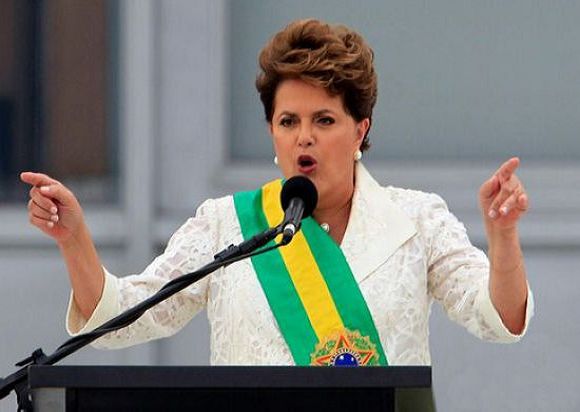 RIO DE JANEIRO, May 6 (Xinhua) — Brazil’s President Dilma Rousseff commented on Wednesday on yet another protest against the Workers’ Party, to which she is affiliated, saying that protest is a part of democracy and something that must be respected.

On Tuesday evening, Rousseff’s predecessor Luiz Inacio Lula da Silva made an appearance in a Workers’ Party TV advertisement. During his speech, many people expressed discontent with the party, which has been ruling Brazil since 2003, and protested by banging pans and making a lot of noises.

Protests were then registered in the majority of Brazil’s states, mostly in middle class and rich neighborhoods.

“In other countries, protests like this may not be normal, but in Brazil they are. We built a democracy, so respecting people’s freedom of expression is something we’ve achieved with a lot of efforts,” she said.

The country is going through an economic crisis with a rising inflation. In addition, the Petrobras bribery and money-laundering scandal has fueled public anger.

The scandal was a blow to Rousseff, who was a Petrobras executive and later served as minister of mines and energy.

Rousseff’s denial of any knowledge of the scandal, which reportedly dates back to the 1990s, has failed to convince people. There are calls for her impeachment.

Rousseff was re-elected for a second four-year term in October in the narrowest victory in Brazilian history.