The deterioration of the Brazilian economic situation in the last few months is quite impressive. Looking through a few of the recent economic indicators, the only ones that are pointing up are the ones that you would like to see going down: inflation, unemployment, delinquency rates, interest rate and public debt.

Despite an economic policy U-turn in the second Dilma Roussef´s government, represented by the substitution of the heterodox Finance Minister Guido Mantega by the University of Chicago-trained Joaquim Levy and by the Brazilian Central Bank’s much tougher monetary policy stance, the government has not been able to contain a deterioration in the expectations. The confidence indicators are at their lowest level in history, indicating that not only is the situation dire, but also there is no likelihood of it getting any better in the short term.

Levy tried to fix the deplorable state of the fiscal accounts, as well as to build the necessary conditions to make the economy grow again, but he was attacked by all sides, not only in the Legislative but also in the Executive. The bombardment of ministers that try to contain public spending is nothing new in Brazil. However, due to the aggravating current circumstances, this tradition promises to be particularly damaging.

This unexpected announcement caused great dismay, because it showed the inability to obtain fiscal results that are minimally acceptable. It is true that the fall in economic activity has caused major harm in tax revenues, but the large size of the target cuts was interpreted as lack of political support to Levy. The implication is clear: the economic crisis in Brazil is worsening and will last for many quarters.

As if the internal situation were not worrying enough, the international economic outlook — in contrast 2005, when Luíz Inácio da Silva, the former president known as Lula, was beset by similar problems – is poor and probably worsening.

China has lost its growth impetus, taking with it a lot of the demand for the commodity-based Brazilian exports that had made possible the sensation of increased welfare in Lula’s governments.Europe is growing weakly as it digests the endless Greek crisis. Even the US, which has been the main source of good news in the global economy, is thought likely to raise interest rates, creating conditions for capital to gravitate away from emerging markets and apply further downward pressure on emerging market currencies, including Brazil.

It is tough to envisage how Dilma will be able to carry out the three and a half remaining years of her second term amidst such a crisis.

PMDB’s (the main coalition party) statement that it is going to have a candidate in the 2018 presidential elections, as well as Michel Temer, the vice-president, saying that he would keep Levy as finance minister if he were elected provide insights into the difficulties that Dilma faces. Some think that if she were impeached, this could open the way for a more stable coalition government until the 2018 elections. Obviously, the difficulties in such a scenario are huge, starting with the impeachment process itself (Brazil does not have a parliamentary system).

However, the status quo scenario is not less challenging. The charts show simulations of the gross public debt under different scenarios. The first scenario is based on current consensus forecasts. Growth and inflation projections are the median of their respective projections in the so-called FOCUS report (in which the Brazilian Central Bank surveys several economic agents). 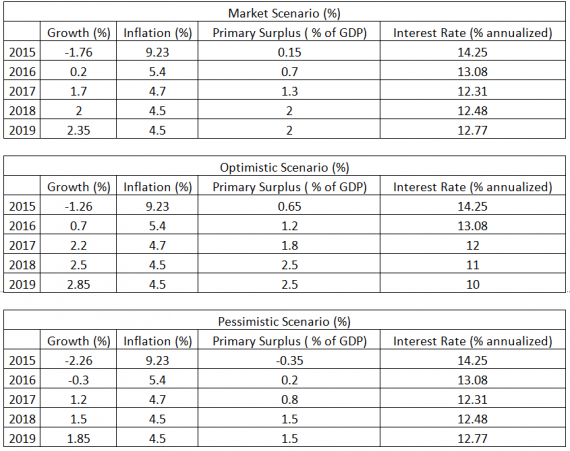 The chart below shows Monte Carlo simulations for the gross public debt, considering the market scenario, the optimistic scenario and the pessimistic scenario. 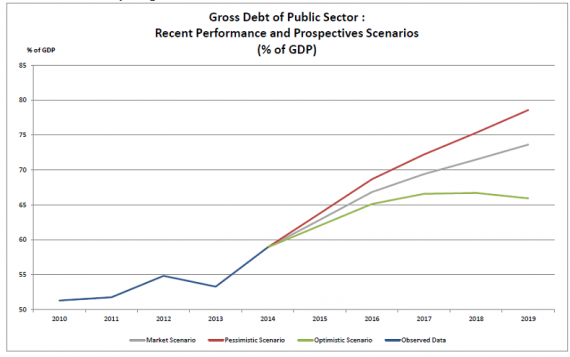 The frightening conclusion is that, except for a very optimistic scenario, there is vigorous and persistent growth in the public debt as share of GDP to levels too high for a country that is trying to keep its investment grade. Those being the perspectives for the evolution of the debt, there seems to be no doubt that Brazil would end up losing its investment grade, as duly signaled by the negative outlook given by S&P on July 28.

With the loss of investment grade status, Brazilian economic growth perspectives would get even worse. Nowadays, more than a fifth of the domestic federal bonded debt is held by foreign investors, an all-time high for Brazil. Many of those cannot invest in assets unless they have investment grade status. The exit of many of these investors would contribute to further depreciate the Brazilian real and raise domestic interest rates, especially the ones paid on long term bonds. The effects on the already battered Brazilian stock market would also be severe. All of that would imply in a rise in the cost of capital for Brazilian firms at a time when investment is already anaemic.

To sum it up, the political and economic crises will create increasingly difficult situations for the country. It is very unlikely that Dilma’s administration would be able to stabilise the economy in a way that will prevent a Brazilian downgrade to non-investment grade (junk) status. But even a coalition government that would result from a hypothetical and traumatic impeachment, would not be able to guarantee the maintenance of investment grade status and economic growth revival. The Brazilian scenario is very bad and will remain so for several quarters.

The authors are academics in the department of economics at the Pontifical Catholic University of Rio de Janeiro.