Brazilian Politics on the Cover of International Newspapers

The arrest of a Brazilian billionaire, Andre Esteves, from the BTG Pactual Bank, and the Brazilian Senator, Delcídio do Amaral, from the same political party as President Dilma, occupied the covers of several international magazines.

Both of them are accused of trying to obstruct the investigations related to Petrobras scandal, which encompass huge briberies and money-laundering accusations. 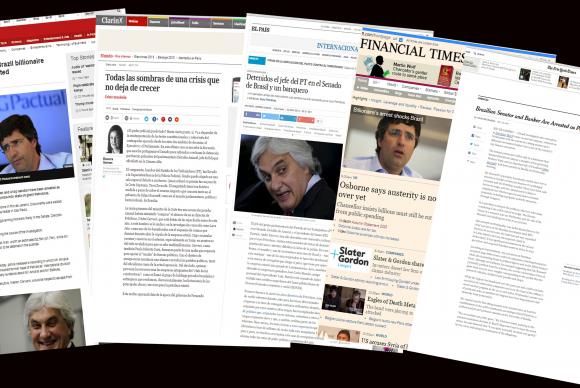 According to the Financial Times, arresting the banker was unexpected. The operation surpassed the traditional targets (politics and lobbysts) and reached the sophisticated Brazilian financial market.

The New York Times alleged that this episode may complicate the tense relationship Ms. Rousseff has with Congress, and the difficulty she has had getting legislation approved.

The Spanish El País explained details about the event and added that, as a consequence, the price of dolar rose in Brazil and the Brazilian stock market (IBOVESPA) dropped.

The Argentinian paper Clarín and the English website BBC also dedicated a special space to this episode.