PARIS, Dec. 8 (Xinhua) — BASIC countries, namely Brazil, South Africa, India and China, on Tuesday called for a Paris climate agreement in accordance with the principles of equity and common but differentiated responsibilities and respective capabilities. 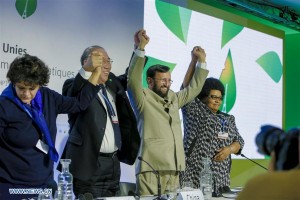 “The purpose of the Paris agreement is to enhance the implementation of the UNFCCC in order to achieve its objective,” BASIC countries said in a joint statement.

The countries said they are committed to reaching a “comprehensive, balanced, ambitious and legally binding” agreement on climate change.

They also called for “a strong, comprehensive and meaningful decision on pre-2020 goals in Paris with a view to laying a solid foundation for post-2020 enhanced action,” especially in regard of financial support from developed countries.

The grouping further called on “developed countries to progressively and substantially scale up their support in the post-2020 period, with 100 billion U.S. dollars per year as a starting point, in order to fulfill their obligations under the Convention.”

BASIC countries encouraged all parties to show “the flexibility required” to reach a strong Paris outcome.

“At this stage, parties should focus on resolving the remaining areas of divergence, in order to adopt a clear, concise and coherent legal text acceptable to all parties in a timely manner,” they said in the joint statement.

On the other hand, there should be “differentiation between developed and developing countries in each element of the agreement,” which “does not weaken collective effort to tackle climate change” but rather “paves the way to its global effectiveness.”

As developing nations, BASIC countries stressed the importance of “securing access to the support that they require to “contribute their best efforts to the global response to climate change.”