A substantial majority — 91 percent — of Chinese in a survey hold a positive attitude toward entrepreneurship, backed by favorable government policies and social environment, according to the recently released 2015 Amway Global Entrepreneurship report. 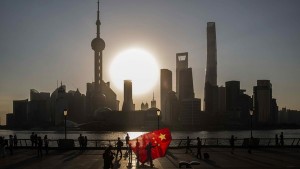 The annual report talked to 1,001 people over 18 years old in major Chinese cities such as Beijing, Shanghai, Guangzhou, Chengdu and Wuhan, who generally believe that through entrepreneurship one can better balance work and family, earn extra income and fulfill personal goals. Of all the incentives, “being one’s own boss instead of being employed by others” is increasingly appealing for many people.

In recent years, mass innovation and entrepreneurship has become a new engine for China’s social and economic development, along with the government’s efforts to streamline administration, reduce taxes and simplify commercial systems.

The country, with a labor force of around 900 million and annual college graduates of more than 7 million, has witnessed a surge in entrepreneurship in recent years. In 2014, more than 10,000 new enterprises were registered every day, creating numerous employment opportunities.

Meng Xiantang, a senior official at the National Development and Reform Commission, said operating assets for new enterprises reached 2 trillion yuan ($314.6 billion) by the end of the first half year, with profits of around 800 billion yuan, which helped drive GDP growth by 0.4 percentage points.

According to the report, 73 percent said Chinese society supports entrepreneurship, far higher than the global average of 50 percent and Asian average of 63 percent. It also shows that Chinese people in the 35-49 age group have the strongest initiative toward starting a new business.

The 2015 Amway report for the first time introduced the Amway Entrepreneurship Spirit Index (AESI), which analyzed different countries’ conditions in three dimensions of desire, feasibility and stability. The result shows that China’s figure is 79, higher than the global and Asian averages of 51 and 64.

In the Chinese survey, 86 percent expressed a strong desire for entrepreneurship, while 81 percent believe they possess entrepreneurial capabilities, and 71 percent said they will pursue their dream of entrepreneurship even in the face of objections from family and friends.