BEIJING, Dec. 6 (Xinhua) — The new initiatives launched by Chinese President Xi Jinping on Friday during a landmark summit to boost comprehensive cooperation with Africa will inject a strong impetus into the development in both China and Africa, and chart a clear course for an all-round partnership between the two sides.

The proposals, aimed at pushing forward collaboration between China and African countries in the new era, cover areas ranging from industrialization, agricultural modernization to financial services and green development, as well as peacekeeping and security. 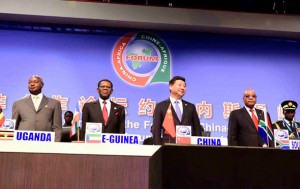 The two-day summit, themed “Africa-China Progressing Together: Win-Win Cooperation for Common Development,” will be remembered in history as a new starting point in building a much stronger China-Africa partnership.

Addressing the opening ceremony of the Forum on China-Africa Cooperation (FOCAC) summit in Johannesburg of South Africa, Xi put forward a massive plan to carry out 10 major cooperation projects in the coming three years in Africa with support from China and urged the two sides to strengthen five “pillars” to lift their time-honored win-win partnership to a higher level.

Covering such areas of cooperation as industrialization, infrastructure construction, trade and investment and poverty reduction, the 10 programs will tremendously promote the modernization of Africa and improve the well-being of the people living in the continent.

Meanwhile, to ensure a smooth implementation of the initiatives, Xi pledged to provide 60 billion U.S. dollars in financial assistance to Africa, including 10 billion dollars for a China-Africa production capacity cooperation fund.

“China-Africa relations have today reached a stage of growth unmatched in history,” Xi told African leaders at the summit. “Let’s join hands … and open a new era of China-Africa win-win cooperation and common development,” he added.

African analysts hailed Xi’s keynote speech, saying the 15-year-old FOCAC, as a long-term mechanism to explore ways to promote common growth and cooperation between the two sides, has drawn a blueprint for the future China-Africa ties.

He said the package of measures proposed by Xi reveals the new features of China’s foreign policy on Africa and is set to be a vital driving force for the strengthening of bilateral pragmatic cooperation.

Professor Munene Macharia, international relations lecturer at the U.S. International University in Nairobi of Kenya, said that the documents adopted in Johannesburg will soon be translated into serious actions.

When the forum was first established in 2000, trade volume between China and Africa stood at 10 billion dollars.

Now China has become the continent’s largest trading partner, with two-way trade volume expected to reach 300 billion dollars in 2015, according to the Ministry of Commerce of China.

However, this situation has radically changed with the African countries now regarding China as the most suitable partner in their national industrialization and other development programs, he added.

“Africa’s manufacturing capacity failed to obtain meaningful development during the past decades,” but it now provides huge opportunities for industrial cooperation between the two sides as well as enough space for further development, said Fay Chung, an African scholar of Chinese descendant in Zimbabwe.

Meanwhile, China’s engagement with Africa is changing. After decades of helping African countries build infrastructure and providing aid, China has seen more companies in Africa expand their presence in other wider fields such as agriculture, transportation and environmental protection.

Both mutual and multilateral cooperation has entered a new period, Chung said, suggesting that the two sides should better combine China’s development experience and production capacity and Africa’s natural and human resources.

In Xi’s speech, China and Africa are described as a community with a common destiny as they share similar historical experiences and similar courses of struggle for independence and development. What’s more, they also share the achievements of joint development.

AN EXAMPLE OF SOUTH-SOUTH COOPERATION

South-South cooperation, namely, economic and technological cooperation among the world’s developing countries, is a great undertaking that unites developing nations in their efforts to pursue self-reliance and continuous progress.

As China is the world’s largest developing country and Africa is the continent with the biggest number of developing and underdeveloped countries, their cooperation can serve as the most typical and representative example of South-South cooperation.

During the High-Level Roundtable on South-South Cooperation co-hosted by China and the Untied Nations in late September, President Xi brought forth a four-point proposal and a package of initiatives to help boost development in developing countries.

“China-Africa cooperation, as an important and major part of the South-South cooperation, is proved to be successful,” Macharia said, adding that it has shown to the world how the two sides, in different continents and being far apart from each other, join their hands to achieve common growth and prosperity.

As the overall strength of developing nations grows, China-Africa cooperation as well as South-South cooperation are set to play a bigger role in promoting the collective rise of developing countries and generating a solid, sustained and inclusive growth of the world economy.

“Sino-African cooperation will inject fresh vigor into global economic recovery despite some complex challenges we are facing,” Ikiara said.