Notwithstanding a tough macro economic environment, leading private banks ICICI, HDFC and Axis put up resilient growth in the March quarter. While Axis Bank’s profits were ahead of estimates, those of ICICI Bank and HDFC Bank was in line with expectations.

On Friday, ICICI reported a 15 per cent rise over a year in standalone net profit to Rs 2,652 crore, while Axis’ profits increased 18.5 per cent to Rs 1,842 crore for the quarter.

These banks did well on all three key parameters — credit growth, margins and asset quality performance. Axis and ICICI also set new records of sorts. ICICI’s annual consolidated net profit, for the first time ever, crossed Rs 10,000 crore, while Axis’ net profit crossed $1 billion (at Rs 6,218 crore) in 2013-14. Though HDFC Bank’s net profit growth at 23 per cent was the lowest in 10 years (and the third consecutive quarter of sub-30 per cent growth), it was restricted by a rise in tax rate to 33.4 per cent, compared to 29 per cent in the year-ago period (tax outgo was up 51 per cent). The operational performance continued to be above par.

The three banks are well capitalised to fund their growth and, hence, remain poised to gain from any improvement in economic activity. While most analysts remain positive on all three, many believe the scope for out-performance is relatively higher in the case of ICICI (2.3 times the FY15 estimated price/book value or P/BV) and Axis (1.4 times P/BV), given the premium valuations of HDFC Bank (3.4 times P/BV).

Vaibhav Agrawal, vice-president, research–banking, Angel Broking, says: “Though we like all three, ICICI and Axis are our top picks in this space. We believe both are very well placed to benefit from economic pick-up. Generally, the valuation gap tends to narrow in times of economic recovery. Axis Bank, which is a high-beta stock, can close its valuation gap with ICICI Bank post the new government and can reduce its gap with HDFC Bank to some extent.” 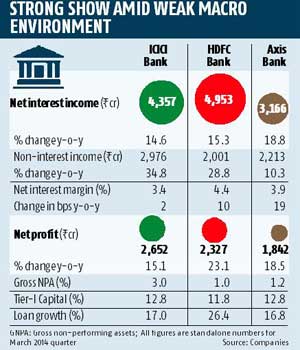 Healthy loan growth
Credit growth remained healthy for all three banks in the quarter, reflected in strong growth in net interest income. Notably, loan and deposit growth was boosted by a one-time increase in FCNR (foreign currency non-repatriable) deposits, swapped with the Reserve Bank of India under a special window in the December 2013 quarter. Thus, HDFC Bank registered a 26.4 per cent loan growth (adjusted growth at 21.8 per cent), while Axis reported 16.8 per cent (15 per cent adjusted) and ICICI saw loan growth of 17 per cent.

Operationally, strong traction in the retail segment aided loan growth for ICICI and Axis. In the case of HDFC Bank, though retail loan growth moderated (to 9.7 per cent) due to a fall in the construction equipment/commercial vehicle segment and was driven by the non-retail segment, which grew 48.4 per cent compared to the year-ago period.

Managements of all three banks remain hopeful of delivering faster loan growth than expected for the sector in FY15. “We expect the system loan growth to be 16-18 per cent in the current financial year. We aim to grow at two to four per cent higher than (this) average. So, our credit growth is expected to be 18-20 per cent,” said Chanda Kochhar, managing director and chief executive officer, in her post-earnings comments.

HDFC Bank is also expected to clock 15-20 per cent loan growth in FY15. In a post-earnings comment this week, Paresh Sukthankar, deputy managing director, had said, “We have been saying that we aim to grow a little faster than the system, maintain our margin in a certain range and manage the growth without compromising our asset quality. We have delivered on all these parameters.”

Somnath Sengupta, executive director & head – corporate centre, Axis Bank, says: “We believe the retail segment will continue to do well in FY15, led by strong demand in home loans and loan against property products. There will be a clearer picture on corporate loan demand after June and we believe commercial vehicle loans will lead growth once the economy picks up. Our credit costs stood at 70 basis points in FY14 and we expect FY15 credit costs to be similar.”

While non-interest income of the banks grew at a healthy clip (it was quite high for HDFC and ICICI Bank), fee income growth moderated to 10-11 per cent for them, with lower growth in insurance sales and slowing economic growth. The non-interest income was led by foreign exchange gains and higher treasury income, both volatile and unsustainable income streams. For instance, ICICI’s other income grew 35 per cent to Rs 2,976 crore, aided by exchange rate gains on repatriation of retained earnings from branches abroad (Rs 222 crore), dividend income from subsidiaries and treasury profit.

Stable asset quality, likely to improve
Notably, ICICI and Axis witnessed a marginal fall in gross non-performing assets (NPAs) ratios on a sequential basis. Those of HDFC Bank remained unchanged. Additions to the restructured book remained reasonable. While ICICI added loans worth Rs 2,156 crore to its total restructured book (similar to the additions in the December 2013 quarter), Axis added loans of Rs 1,115 crore to its (in line with its earlier forecast). HDFC Bank, though, maintained its restructured assets, with negligible additions. As in the past, it remains ahead of peers on asset quality.

While Axis and ICICI have relatively higher exposure to troubled sectors (such as power and infrastructure), the banks have done well to hold up their asset quality in a narrow band over the past eight to 10 quarters. In fact, ICICI’s gross NPAs have been falling from 3.5 per cent in the June 2012 quarter. Both HDFC Bank (0.9 to one per cent) and Axis Bank (1.1-1.3 per cent) have maintained their gross NPA ratios in this period. The managements of HDFC and ICICI expect asset quality to bottom out sooner than later and are hopeful of improving it this financial year. The Axis management, too, is cautiously optimistic on asset quality.

Stable funding costs and higher cost efficiencies enabled the banks to expand their net interest margins (NIMs) over the March 2013 quarter. The full-year NIM of ICICI Bank improved by 22 basis points to 3.33 per cent. Kochhar said the bank is expected to maintain its margin at the current level in 2014-15. HDFC Bank has been maintaining a guidance of keeping its margin in the range of 3.9-4.4 per cent.

On a year-on-year basis, barring a marginal dip in HDFC Bank’s case, NIMs were stable to marginally higher for the other two private banks. However, higher tax rates (to comply with RBI’s norm of creating deferred tax liability) restricted bottom line growth for ICICI and HDFC Bank. In FY15, though, the tax rate is likely to stabilise at 30-33 per cent, believe analysts. Provisioning reduced 15.1 per cent for Axis Bank (due to a Rs 100 crore write-back on depreciation) and 4.8 per cent for HDFC Bank, boosting profitability. For ICICI Bank, though, this metric surged a significant 55.2 per cent year-on-year and reduced profitability.