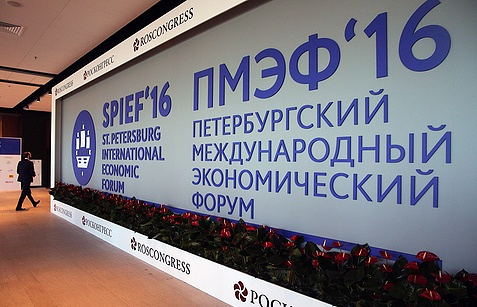 The jubilee XX St. Petersburg International Economic Forum (SPIEF) is opening on Thursday in the Expoforum congress and exhibition center.

The forum is the most significant annual economic conference in Russia and is often called by the press “the Russian Davos” similar to the World Economic Forum in Switzerland’s Davos.

The jubilee forum’s program will be one of the most extensive for the period of its holding: three days include over 100 events, including a forum of the Business 20, as well as business forums of the Shanghai Cooperation Organization and BRICS (Brazil, Russia, India, China and South Africa), a summit of energy companies, a conference on economic development of the Arctic and a special session of the Valdai Discussion Club.

The forum will for the first time be held in a St. Petersburg suburb, in a recently built congress and exhibition center, Expoforum, one of the biggest in Eastern Europe.

The event will be attended by representatives of 600 Russian and some 500 foreign companies from 60 countries – the United States, France, Switzerland, Japan, Great Britain, Germany, Italy etc.

According to Russian presidential aide Yury Ushakov, 230 foreign companies will be represented at the level of CEOs. He noted “powerful presence of representatives of other states, extensive participation of leading international companies, including from countries where it is not recommended to send their representatives to the forum.”

Dialogues on the future of Russia and the EU

The key topic of the forum is “On the threshold of a new economic reality”. Discussions of problems facing the global economy in the context of changing political and economic relations between the world’s biggest countries and regions will be held.

One of the main topics on the agenda will be discussion of the future of Russian-European relations. A few big events will be dedicated to it, including the speech by European Commission President Jean-Claude Juncker at the opening session June 16.

On the same day, Juncker will meet with Russian President Vladimir Putin and they will discuss a number of key issues in Russia-EU relations concerning both the economy and politics, including the situation around Ukraine and Syria.

“The main thing [during the meeting] is an attempt to look at where we are going in our relations, Russia and the European Union. And even against the background of current differences, what are the opportunities to maintain and develop dialogue,” said Russian presidential spokesman Dmitry Peskov.

At a time when Russia-EU relations are at the most dramatic moment ever in history, SPIEF participants will gather for a discussion entitled Russia and the EU: What Follows the “Strategic Partnership” that Never Happened? Russian Foreign Minister Sergey Lavrov, Gazprom CEO Alexey Miller, newly appointed board chairman of Austria’s gas company OMV Rainer Seele and France’s former foreign minister, Juber Vedrin, will be among the speakers.

The significant number of foreign guests is a sure sign speculations about Russia’s so-called “isolation” are wishful thinking.

The Russian leadership and European Commission President Jean-Claude Juncker will meet on the sidelines of the forum to discuss Moscow-Brussels relations, Syria and Ukraine.

“We are very positive about the visit of Mr. Juncker. I think it may be a useful meeting. Whether it will have an impact on the decision about sanctions – that is difficult to say,” said Frank Schauff, the director-general of the Association of European Businesses. It is noteworthy that there has followed a negative comment from the United States regarding Juncker’s visit. US Department of State spokesman Mark Toner said the visit was sending a wrong signal.

UN Secretary-General Ban Ki-moon will attend the forum to have several bilateral meetings.

Italian Prime Minister Matteo Renzi will lead a large business delegation. Ahead of the forum he said that Italian businesses hoped to sign cooperation agreements with Russian partners.

South Korea’s delegation under Foreign Minister Yun Byung-se plans to meet with Russian businesses to focus on the outlook for economic cooperation in the Far Eastern and Siberian regions.

Taking part in SPIEF activities will be the president of the BRICS New Development Bank Kundapur Vaman Kamath. On the sidelines of the forum Russian Energy Minister Aleksandr Novak will hold meetings with his counterparts from India and Venezuela and Iran’s industry minister.

Dialogue with the world

The SPIEF will be a good occasion for foreign delegates to discuss the outlook for economic cooperation with Russia.

Russia’s relations with countries in the Asia-Pacific Region will be central to the discussion Russia-Japan: Creating a New Business Cooperation Model.

The SPIEF will host business forums of the Shanghai Cooperation Organization and BRICS and B20.

The Russian head of state has annually spoken at SPIEF since 2005. With account for the first two presidential terms, for Putin the forum will become the eighth.

President Vladimir Putin is expected to speak to UN Secretary General Ban Ki-moon, Kazakh President Nursultan Nazarbayev, the chiefs of leading global investment funds and other officials, hold talks with the heads of the leading foreign companies and business associations.

The central point of the forum’s program will traditionally become Putin’s speech at the plenary session on June 17. Putin’s spokesman Dmitry Peskov has noted that in his speech, the Russian leader will most likely “stress Russia’s interest in foreign investment, interest in continuation and expansion of cooperation with foreign businesses.”

Putin’s program at SPIEF will end with a traditional meeting with the chief executives of leading global information agencies organized by TASS.