“Advanced manufacturing” products account for nearly half of South Africa’s manufactured exports. These are those high value-add manufactured goods, like industrial and agricultural machinery, chemicals, and automotive products, which require competent manufacture rather than low-cost labour to succeed. By moving beyond products that are proven export successes like vehicles, and into product adjacencies such as vehicle component kits, South Africa could add more than R500-billion to exports by 2030. 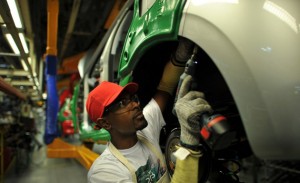 South Africa’s manufacturing sector is punching below its weight

Manufacturing should be a major sector in any developing economy. As an economy develops, there’s typically a shift towards higher value-add activities, with manufacturing maxing out at 30 to 40 percent of GDP, before declining as services growth overtakes it and GDP per capita rises to developed world levels. South Africa is different: since 1981 manufacturing’s GDP contribution has effectively been halved and today stands at just 12% of GDP, while GDP per capita falls well within emerging market levels.

A number of factors have contributed to this, but ultimately a manufacturing industry that has historically been inwardly-orientated, has struggled to remain competitive on global terms in an era of liberalized trade. The prevalence of manufacturing activities in the Gauteng province, rather than close to coastal ports illustrates this inward focus clearly. Exacerbating this has been South Africa’s weak cost position. Logistics costs are high because many manufacturers are inland and depend on expensive road logistics to reach ports. Labour’s cost structure and productivity, which sit in between the emerging and developed market economies, does not easily encourage labour-intensive manufacturing. Other input costs, like steel, energy and water are under increasing price pressure. The consequence is that manufacturing growth has slowed, some subsectors have shrunk and the sector has declined in relative contribution to the economy.

Despite these challenges, South Africa still has a window of opportunity in the manufacturing sector.

South Africa needs to pursue a path that plays to its strengths. This means a focus on unlocking industries that can be competitive. According to new research by the McKinsey Global Institute, called “South Africa’s big five: bold priorities for inclusive growth”, this opportunity lies in advanced manufacturing products. These are the high quality, skills-intensive manufactured products where low cost manufacturing centres offer little advantage. The research argues that developing and commercializing product adjacencies in advanced manufacturing will deliver R500 billion in exports by 2030. Today these adjacencies account for 31 percent of exports, but this could grow to 66 percent by 2030. Adjacencies are those products that build on the existing skills and capital equipment that businesses own by developing variations that are suitable for new markets or new industries, or are complementary products currently not produced.

Conventional wisdom says South Africa cannot be a successful manufacturing hub. But conventional wisdom has not been focused on the niche areas where South Africa has been successful. Some examples: South Africa is a major exporter of centrifuges globally; between 2003 and 2013 exports of engines and turbines grew at 8 percent a year, while exports of mining and construction machinery grew at 10 percent a year (real terms). This is despite overall output in the subsector only growing by 1.4 percent per year.

Capturing this opportunity will require a change in course. Business will need to aggressively pursue international markets that are growing (in Africa and Asia), raising productivity (through larger economies of scale, capital investment and upskilling) and investing in R&D (in new process and adjacent product development). Opportunities lie in examples such as machinery, appliances, motor vehicle parts and pharmaceuticals. Government could also play a stimulatory role. The design of Special Economic Zones needs to take into account an orientation towards export logistics and could encourage necessary capital investment through incentives. These zones could function, as in other countries, as a centre for experimentation at the small scale, enabling business and labour to test successful models for e.g., cross-skilling. Another area of support would be the expansion of regional trade agreements. South Africa has only 16 of these (concentrated in SADC and Europe), compared to Brazil’s 45 and Germany’s 103, on a much broader global scale.

While services-led growth created most new jobs in South Africa over the last decade, an additional R500 billion in manufactured exports could generate far greater economic stimulus. Including indirect effects, we estimate this would create 1.5 million jobs in the economy, particularly higher-paying skilled jobs, provide a more diversified exports base and spawn other value-adding services in the economy. It may be surprising to read that South Africa has such an immense opportunity, but make no mistake this will require dedication and focus to achieve. The effort will be worth it.

Northcote is an Associate Principal and Jacobson is an Engagement Manager in the Johannesburg office of McKinsey & Company. They work in industrial strategy and economic growth topics respectively.