Russian President Vladimir Putin has reiterated that his country does not seek a confrontation with the West, saying doors remain open to economic cooperation between Moscow and Western governments, amid a dispute over the crisis in Ukraine. 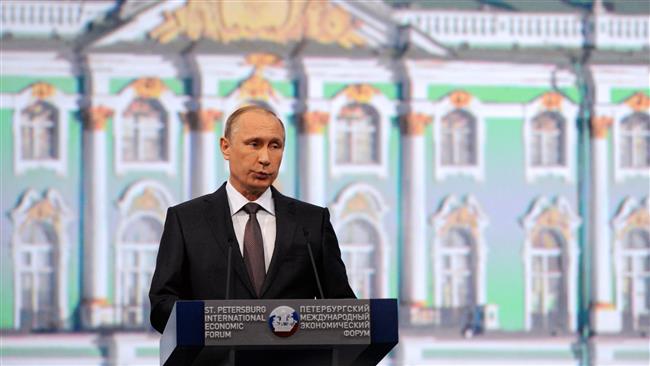 “Russia is open to the world,” Putin told foreign and Russian investors at the Saint Petersburg International Economic Forum (SPIEF 2015) on Friday, rejecting claims that the crisis in Ukraine has overshadowed Russia’s traditional cooperation with the West.

“Our active cooperation with new centers of global growth in no case means that we intend to pay less attention to our dialogue with our traditional Western partners,” Putin said.

The Russian president touched upon the economic achievements of his government. In an apparent reference to predictions of a crisis befalling Russia as a result of Western sanctions, he said, “We have stabilized the situation… We have a stable budget. Our financial and banking systems have adapted to new conditions.”

Such a crisis “had not happened,” Putin said.

The economic forum started Thursday amid a new high in tensions between Russia and the European Union after France and Belgium froze Russian assets in a row over the compensation for shareholders of now defunct Yukos Oil Company.

Russia’s Foreign Minister Sergei Lavrov reacted to the decision, saying the orders were timed to coincide with the economic forum.

“I am not a fan of conspiracy theories but even if it is a coincidence, of course this works against those who want to work in Russia in a normal way, without some sort of artificial barriers,” Lavrov said Friday.

Russia and the West have been at odds over an armed conflict in eastern Ukraine. Washington and its allies in Europe accuse Moscow of having a major hand in the deadly crisis there. The Kremlin, however, denies the accusations.

The EU has imposed several rounds of anti-Russia sanctions following Crimea’s decision to rejoin the Russian Federation in a referendum in March 2014. In a tit-for-tat measure, Moscow imposed year-long food bans on the United States, the European Union, Australia and Canada last August.

« Roots of a Brazilian Scandal That Weighs Heavily on the Nation’s Economy, Politics» Putin: EAEU-Belt Integration to Bring Enormous Opportunities