Russia’s ruble rose to the strongest level in more than two weeks as companies lined up to make payments before a tax deadline.

The currency of the world’s largest energy exporter appreciated as much as 0.3 percent per dollar to 61.99, extending a three-day advance to 0.8 percent. Companies, including exporters who receive revenue in foreign currency, are due to pay about 980 billion rubles ($15.8 billion) in various taxes this week. 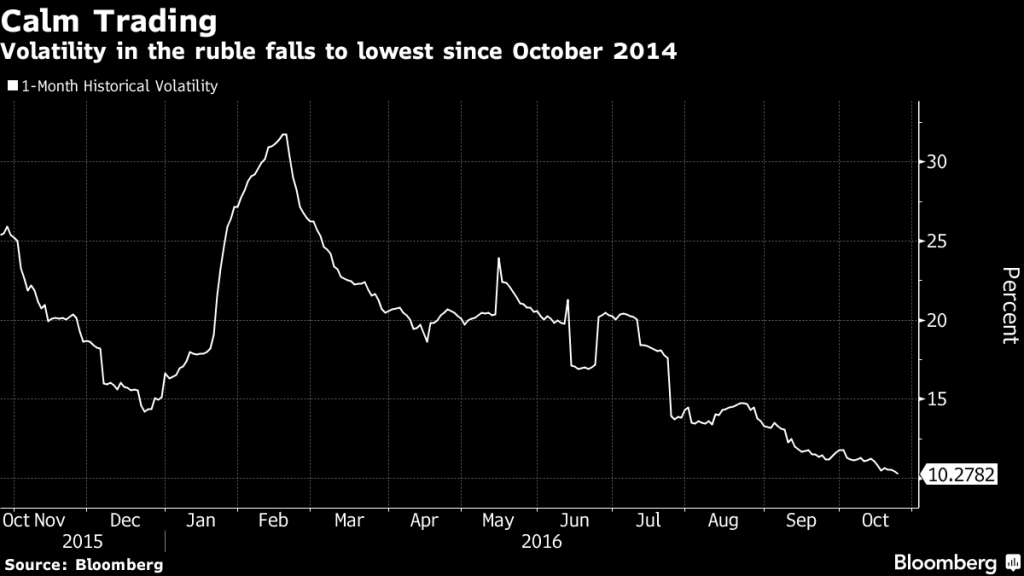 The ruble has appreciated 16 percent this year, the second-best performance among emerging-market currencies after Brazil’s real, amid a near 80 percent gain in crude from a record low on Jan. 20. The Moscow-based Institute for Agricultural Market Studies said Tuesday the currency’s rise is starting to hurt exports of wheat, while tax-season demand may have added to excessive strengthening, said Dmitry Polevoy, chief economist for Russia at ING Groep NV in Moscow.

“The market is still dominated by exporters, and it makes no sense to play against them,” Polevoy said. “Speculative flows are minimal.” Polevoy predicted the ruble will weaken after the tax period ends to trade in a range of 62.20 to 63.30 per dollar.

The effect of the tax period has pushed the ruble the most out of step with oil in more than a year. The 120-day correlation between Brent, Russia’s main export earner, and the ruble dropped to 0.60 last week, the lowest since September 2015. A reading of 1 would mean the two assets move in tandem. Ruble volatility is the calmest in almost two years, data compiled by Bloomberg data show.

The ruble pared gains to trade up 0.1 percent as of 6:10 p.m. in Moscow after crude oil retreated, dropping 1.5 percent in London to $50.6 per barrel. Brent also fell 0.7 percent on Monday after Iraq said it should be exempted from planned production cuts being orchestrated by the Organization of Petroleum Exporting Countries.

Russia will probably export less wheat this season than expected before as a stronger currency makes it harder to find customers for the grain, the Institute for Agricultural Market Studies said.

“A stronger ruble means local goods are losing their cost advantage, becoming less competitive,” Yury Tulinov, head of research at Rosbank PJSC in Moscow, said by e-mail. “However given the structure of the Russian economy, such cases as wheat are of a one-off nature.”

Russian government bonds fell, pushing the yield on 10-year notes up one basis point to 8.37 percent.

The Micex Index of stocks added 0.8 percent, the most on a closing basis in 13 days. Diamond manufacturer Alrosa PJSC rose 2.7 percent as shares of raw-material producers and currencies of commodity-exporting nations rallied on growing signs of resilience in the global economy. A gauge of metal and mining companies on the Micex gained to the highest since Sept. 22. Novolipetsk Steel PJSC advanced 2.3 percent.