Hog farmers in Russia are producing so much pork that they are selling it overseas just three years after the country was importing more of the meat than any other buyer except Japan.

Domestic output has increased 26 percent in four years to the highest yet, and imports have plunged by more than 80 percent from a peak in 2012, U.S. Department of Agriculture data show. The industry’s resurgence, which led to slumping hog prices from the U.S. to Germany, got some help from a Russian government increasingly uneasy about relying on foreign food supplies and its strained relationship with neighbors. 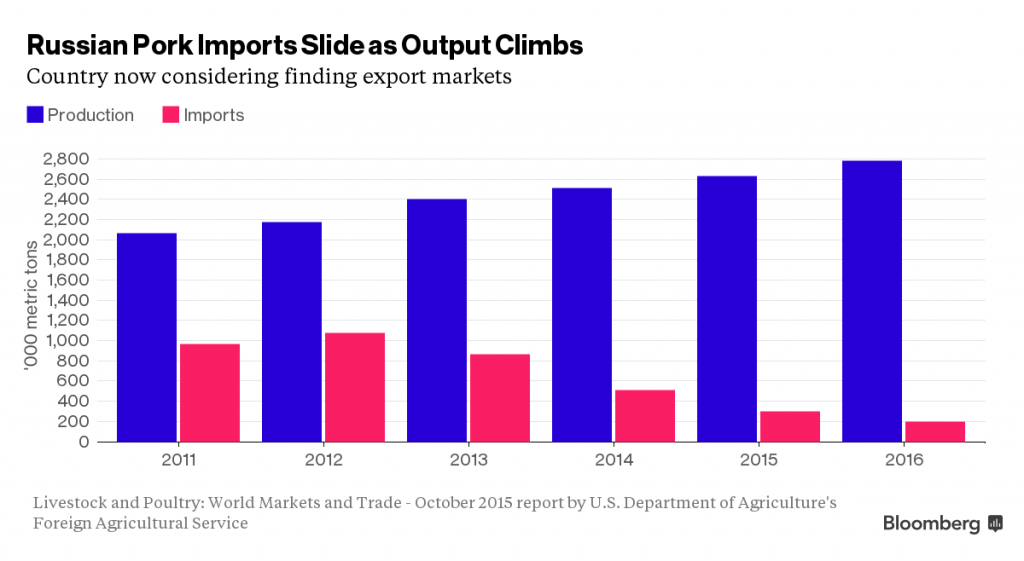 The government increased support to agriculture after President Vladimir Putin banned some food imports from the U.S., the European Union and several other countries. The restrictions were a response to economic sanctions imposed on Russia over its involvement in the Ukraine conflict. Putin said this month that Russia has the potential to be a world leader in food and should be self-sufficient in agriculture by 2020.

Russia’s increasing self-reliance is contributing to a slump in global prices, according to the USDA. Hog futures traded in Chicago have fallen 30 percent this year to 56.45 cents a pound, while pig prices in Germany slumped last month to the lowest level since January 2011, according to industry group ISN. Cheaper pork may boost international trading in the meat next year, the USDA said.

While Russia isn’t much of an exporter now, by 2020 shipments may reach 10,000 tons, an increase of 2,400 percent from 2014, according to Daniil Khotko, an analyst at the Moscow-based Institute for Agricultural Market Studies, or Ikar. Overseas sales of pork byproducts may more than double to 30,000 tons, he said.

Supplies of hog parts, which are popular in Asian cuisine, went to Hong Kong, Vietnam and Thailand and totaled 13,000 tons in 2014, Khotko said, citing government data. Global pork exports were 6.9 million tons that year, including 2.2 million from the U.S., data show.

Reduced domestic demand also has eased the burden on imports. Consumption that reached 3.24 million tons in 2012 fell to 2.93 million this year amid an economic slump, USDA data show. Consumption may improve next year.

Russia will produce enough pork within the next two years to meet domestic demand, said Vladimir Labinov, chief of the Agriculture Ministry’s livestock department. Exports are “the right thing for us to do,” Labinov told a conference of hog farmers on Nov. 25. Government support, mainly through subsidies that cover a portion of interest payments on loans, helped boost farmer profit, he said.

Russia still faces some hurdles, Ikar’s Khotko said. Importers will need to be convinced producers have eliminated the threat of diseases like African swine fever, which led to some culls last year, and there will be “severe” competition from the U.S. and Brazil.

Affordable supplies of feed wheat and the devaluation of the ruble make exports competitive, according to Maxim Basov, director-general of Ros Agro Plc, a local producer. It costs the company 50 rubles (70 cents) produce 1 kilogram (2.2 pounds) of pork, he said. In the U.S., the cost of raising one pig for slaughter was about $1 a kilo as of last month, according to an Iowa State University study.

Russia’s agriculture regulator, Rosselkhoznadzor, is hosting delegations from China that are evaluating the safety of future meat imports. Officials from China’s General Administration of Quality Supervision, Inspection and Quarantine in October visited OOO Agro-Belogorye Group of Companies, which, according to the National Union of Hog Farmers, is Russia’s fourth-largest pork producer.

The company may get permission next year to supply other countries, according to Olesya Dmitrova, director-general of its trading unit.

“It’s a sin to not to export, especially when we are near the world’s largest pork importers,” which include China, Japan and South Korea, said Ros Agro’s Basov. The company plans to start building a pork unit near the Chinese border next year that will produce meat by 2019, he said.