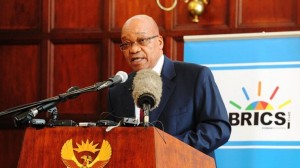 Government will not abandon the fiscal path that we have chosen in the last few years.  Maintaining a prudent fiscal position remains one of government’s top priorities.

The new Minister will strengthen the path and continue to support all efforts aimed at improving the lives of ordinary South Africans.

Minister van Rooyen is supported by Deputy Minister Mcebisi Jonas who carries many years of experience in the economic cluster.

They are supported by the hard-working and capable National Treasury team, led by the Director-General, Mr Lungisa Fuzile.

I would like to thank the former Minister of Finance, Mr Nhlanhla Nene for his sterling contribution to the National Executive and to taking forward the goals of building a better life for all our people.

The urgency of the changes in the leadership of the National Treasury was occasioned by the need to send nominations to Shanghai, of the head of the African Regional Centre of the New Development Bank/BRICS Bank, to be based in Johannesburg. Mr Nene is our candidate for this position.

We are fully backing his candidature, knowing full well that he will excel and make the nation proud in his next assignment.

Government remains committed to adhering to the set expenditure ceiling while maintaining a stable trajectory of our debt portfolio, as set out in the February 2015 Budget.

Our commitment to diversifying our economy, reduce the cost of doing business and utilizing resources much more efficiently to enable a more inclusive economic growth remains important.

We will continue to improve the budget process in order to maintain our international reputation as a global leader in budget transparency.

South Africa continually seeks to enhance the expansive information it provides to its citizens on how public resources are generated and used with the aim of improving budget participation.

We assure the nation that nothing will be done, in supporting state owned entities, that runs contrary to the fiscal prudence that our country is renowned for.

No state-owned entity will dictate to government how it should be assisted.

The implementation of the National Development Plan remains the cornerstone of our economy. We will continue our actions in alleviating the most binding constraints to growth and we have set out a series of urgent economic reforms to build a more competitive economy.

These, among others include:

The economic cluster will meet on Tuesday, 15 December as announced by Minister Jeff Radebe to prepare for a special cabinet meeting on the economy, which will take place on Friday 18 December.
This will enable us to focus specifically and exclusively on the current economic climate and on the country’s response.
« Russia-China-led Bloc Leaders Gather for Annual Meet in China» Nene Has Been Nominated for BRICS Bank Position: Zuma