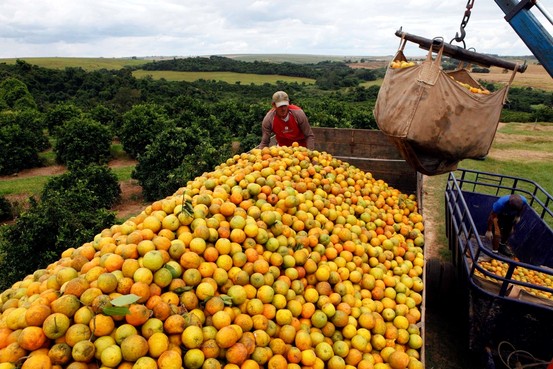 Workers load oranges in Limeira, Brazil. A drought there is pushing up the price of orange juice futures.

Brazil’s dry spell is waking up yet another commodity: orange juice.

Futures prices of frozen orange-juice concentrate Wednesday rose to a nearly two-year high as an abnormally hot and dry Brazilian summer raised concerns over output this year from the world’s biggest producer of oranges.

Brazil’s worst drought in decades has pushed up prices of a wide variety of commodities, including coffee and sugar, to multimonth highs, highlighting how a turn in the country’s weather can influence markets across the globe.

Arabica-coffee futures jumped 44% in February alone, the largest monthly percentage gain in almost two decades. On Wednesday, raw sugar for delivery in May was trading near a two-month high, up 2.7% at 18.20 cents a pound.

Brazil supplies more than half of the world’s orange juice and accounts for more than three-quarters of orange-juice exports, according to the U.S. Department of Agriculture

“I think Brazil is providing the impetus,” said Sterling Smith, a futures specialist at Citigroup, referring to the rise in prices.

A smaller crop from Brazil would further pinch tight supplies of oranges. Groves in Florida, the top U.S. citrus-producing state and biggest grower after Brazil, have been ravaged by citrus-greening disease, a bacterial infection that stunts fruit growth and causes it to fall from the tree prematurely.

Florida growers are expected to produce their smallest crop in 24 years–115 million 90-pound boxes–in the 2013-14 season, which started in October, according to the USDA.

The USDA is scheduled to release its latest monthly estimate on Monday.

Some traders are likely positioning themselves ahead of a possible cut in the USDA’s forecast, Mr. Smith added.