NEW DELHI: Prime Narendra Modi has arrived in the ancient city of Xi’an, the home town of President Xi Jinping. Modi is in China for a three-day visit. Earlier he had expressed confidence that his trip would deepen mutual trust and work out a roadmap for upgrading bilateral economic ties and set a “new milestone” for Asia and developing nations.

Modi, who is undertaking his first visit to China as Prime Minister is in Xi’an, for a summit meeting, an unusual departure from normal protocol which is seen as a reciprocal gesture by the Chinese leader who was hosted by Modi in Ahmedabad when he visited India in September last year.

“I am looking forward to the trip to China … the 21st century belongs to Asia,” the Prime Minister told Chinese media ahead of his visit that will also take him to Mongolia and South Korea.

The Prime Minister, who is accompanied by National Security Advisor Ajit Doval, Foreign Secretary S Jaishankar and senior officials, hoped that his visit will “further deepen” India-China relations and set a “new milestone” for Asia and developing countries.

“I believe that my trip to China will not only deepen the China-India friendship, but also set a new milestone for the relations between developing countries in Asia as well as around the world. There is no doubt about that,” he told state-run CCTV ahead of this visit. 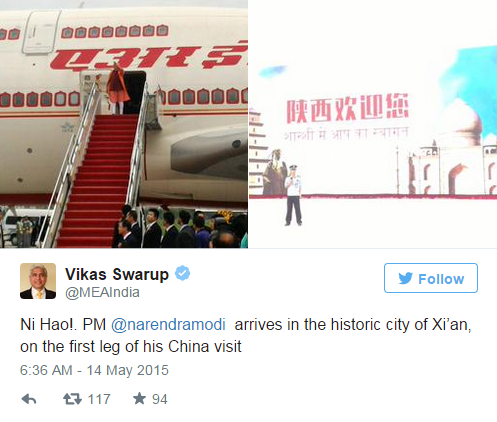 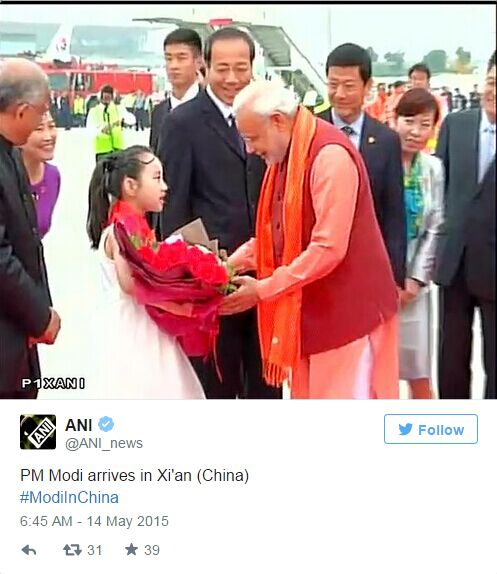 Modi said he wants to focus on how India and China can further strengthen mutual trust and confidence, so as to realise the full potential of the relationship.

“I look forward to working out a roadmap for qualitatively upgrading our economic relations and seek greater Chinese participation in India’s economic growth, especially in transforming India’s manufacturing sector and infrastructure,” he said.
The Prime Minister said he believes the relationship between India and China can be one of the most important relationships of the century.

“I intend to work with the Chinese leadership to lay the foundation for this,” state-run Xinhua news agency quoted Modi as saying.

He said India and China have made great progress in bilateral relations in recent years and managed their differences with patience and maturity.

Faced with irritants like the boundary issue and China’s plans for infrastructure projects in Pakistan-occupied Kashmir (PoK), Modi will have a tough task as he meets the Chinese leadership.

Modi noted that he had met President Xi three times during the last one year and held extensive talks on a wide range of issues.

This is first time since Xi took over power two years ago that he will be receiving a foreign leader outside Beijing and will spend considerable time informally interacting with Modi.

The only other leader Xi has spent time walking around was with Barack Obama last year during APEC summit when he took the US President around Zhongnanhai, the imperial garden in Beijing where the top Chinese leadership resides.

But the list of problems both countries face are considerable, ranging from the festering border dispute to China’s support for India’s arch-rival Pakistan.

President Xi had during his visit to Pakistan on April 20 announced a $46 billion package to construct infrastructure including highways and hydel power projects along the China- Pakistan Economic Corridor through PoK to the Gwadar port in Balochistan.

New Delhi has lodged a protest with Beijing over the China-Pakistan economic corridor.

Serious differences continue to prevail on the border issue even as both sides are making efforts to ensure that peace and tranquillity prevails.

China is not keen on the clarification of the Line of Actual Control (LAC) proposed by Modi last year during the Chinese President’s visit.

The clarification of LAC ahead of the resolution of the boundary was expected to restrict aggressive patrolling from both sides.

Two incursions by the Chinese troops in the Ladakh area during Premier Li Keqiang and Xi’s visits to India in the last two years overshadowed the trips.

The incidents prompted Modi to suggest to Xi last year that clarification of LAC would greatly contribute in efforts to maintain peace and tranquillity of the border where troops from both sides often jostle to assert their claims and counter claims.

The issue was also discussed during the 18th round of the border talks held in March this year.

China says the border dispute is confined only to 2,000 km mostly in Arunachal Pradesh whereas India asserts that the dispute covered the western side of the border spanning to about 4,000km, especially the Aksai Chin area annexed by China in the 1962 war.

Besides having restricted talks with Modi, in his native Xi’an city, Xi would take him on a tour of the iconic Wild Goose Pagoda built in 6th century AD in recognition of monk Xuan Zang’s contribution in popularising Buddhism.

The visit to the spiritual structure assumes significance as Xuan undertook a journey to India in 645 AD through the ancient Silk Road and returned home after a 17-year-long sojourn with precious Buddhist scriptures.

Modi would also be given a traditional Chinese imperial Tang dynasty welcome before the two leaders settle for a banquet.

During Modi’s stay in Beijing, the first meeting of the India-China State and Provincial Leaders’ Forum would be held attended by Chief Ministers of Maharashtra and Gujarat Devendra Fadnavis and Anandiben Patel respectively.

The Prime Minister will also witness a Yoga-Tai Chi joint event at the Temple of Heaven and deliver a public address at the Tsinghua University in Beijing.

The Prime Minister will have a business stop at Shanghai where he will meet Chinese CEOs, visit the Fudan University where he will inaugurate the Centre for Gandhian Studies. He will also be addressing a community event in Shanghai.

On the second leg of his visit, Modi will reach Mongolia on May 17. “There is a rare honour being bestowed on our Prime Minister because this is for the first time on a holiday the Parliament of Mongolia is going to allow a foreign leader to speak and address the membership there,” said Anil Wadhwa, Secretary (East).

The two sides will ink several agreements including one on application of nuclear technology for cancer cure, solar and wind energy, traditional systems of medicine and homeopathy, cyber security and other areas.

The Prime Minister will also attend a mini Naadam festival which includes display of horse racing, traditional wrestling and archery.

This will be the first ever visit of an Indian Prime Minister to Mongolia and takes place in the backdrop of celebrations of the 25th year of democracy in Mongolia and 60 years of its diplomatic relations with India.

Moving to South Korea on the last leg of his three-nation visit, Modi will meet President Park Geun-hye, followed by signing of several agreements including one on Double Taxation Avoidance Convention, shipping, transport, highways, electric power development and other areas. He will also address an Indian community reception.

Bilateral trade is currently at about USD 16 billion. There are 300 Korean companies who have invested $3 billion in India and employ 40,000 workers. Indian investment in Korea is close to $2 billion and it is looking forward to greater access in Korea to pharmaceutical and IT products.

The Prime Minister returns to Delhi from Seoul on May 19.