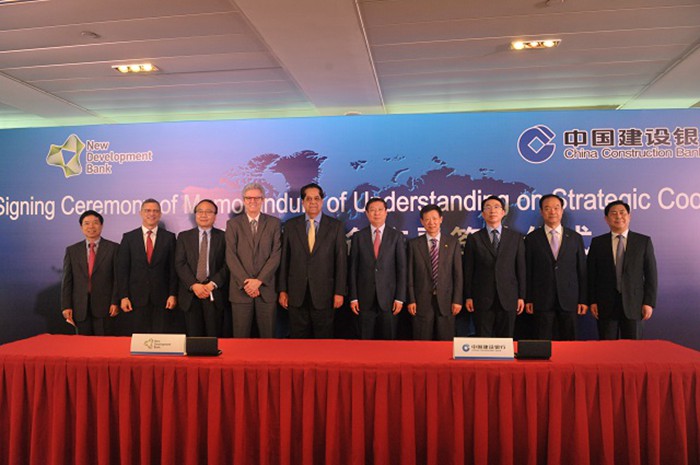 The New Development Bank (NDB) and China Construction Bank Corp (CCB) on Thursday announced a memorandum of understanding on strategic cooperation, focusing mainly on infrastructure funding in the five BRICS countries, besides other emerging economies.

“The NDB, as per its mandate, is building partnerships with major banks in member countries. The cooperation with CCB is important for us, given the key role it plays in infrastructure financing,” said NDB President KV Kamath.

“The MoU will provide our two institutions with a framework for collaboration in several areas, including bond issuance, joint financing and information exchange. I look forward to a long and mutually beneficial partnership,” Kamath added.

CCB is also supporting the NDB with professional underwriting services, credit lines and its commitment to invest in its first financial green bonds. Kamath expressed confidence that with CCB’s support, NDB should be in a good position to issue green bonds in the next few weeks.

“The foundation of NDB is of strategic importance to the economic and financial cooperation between BRICS countries, other emerging economies and developing countries,” said CCB Chairman and Executive Director Wang Hongzhang.

“NDB’s support will enable these countries to remove bottlenecks faced in financing infrastructure and sustainable development projects and provide a strong momentum to their economies.”

Wang said as a commercial bank dedicated to serve infrastructure projects and large corporates, CCB tracks the opportunities in BRICS nations closely and attaches great importance to financial interaction with other BRICS countries and emerging economies.

“The transformation and structural adjustment of emerging countries will give rise to unlimited opportunities. The One Belt One Road Initiative proposed by China also requires significant amount of capital injection,” he said, referring to projects that interest the commercial bank.

According to the memorandum, both sides will harness their respective resource advantages and professional expertise, aiming to build a long-term, stable and mutually beneficial business relationship.

The New Development Bank was established to support and foster infrastructure and sustainable development in emerging economies, notably the BRICS nations of Brazil, Russia, India China and South Africa.

It has an authorised capital of $100 billion and its membership is open to all UN members. The bank became fully operational in February this year. Two months afterm, its board approved the first set of loans involving financial assistance of $811 million.