The poll by InstaVaani showed that 74% of the respondents (769) approved of Modi’s performance as prime minister—unchanged from the finding of an end-November survey, conducted after the ruling coalition’s loss in the crucial Bihar poll.

The Mint-InstaVaani approval rating is the only one on the Prime Minister and his government, and has been conducted regularly since 2014.

In the latest edition, 76% (615 respondents) said they would re-elect Modi if the elections were held now. Some 68% (461) of people who responded to a specific question said they approved of the National Democratic Alliance (NDA) government’s performance.

The poll of 1,044 people across cities was carried out against the backdrop of an often acrimonious debate over “intolerance” that government critics say has increased in the tenure of Modi’s National Democratic Alliance (NDA).

In the last two months, critics have taken the government to task over the suicide of a Dalit scholar of the University of Hyderabad and the arrest of a group of students at Jawaharlal Nehru University (JNU) in Delhi, including its students union president Kanhaiya Kumar, on sedition charges which has sparked a debate on what is “nationalism.”

Modi personally has received flak for his silence on such incidents.

There have been positives too, most notably the national budget.

Finance minister Arun Jaitley’s second full-year budget won praise for its commitment to fiscal rectitude. Jaitley ignored calls to pump-prime the economy and stuck to a fiscal deficit target equivalent to 3.5% of gross domestic product (GDP) while boosting spending on infrastructure and rural development in a farmer-friendly budget that sought to ease the pain of farmers hit by two consecutive droughts. 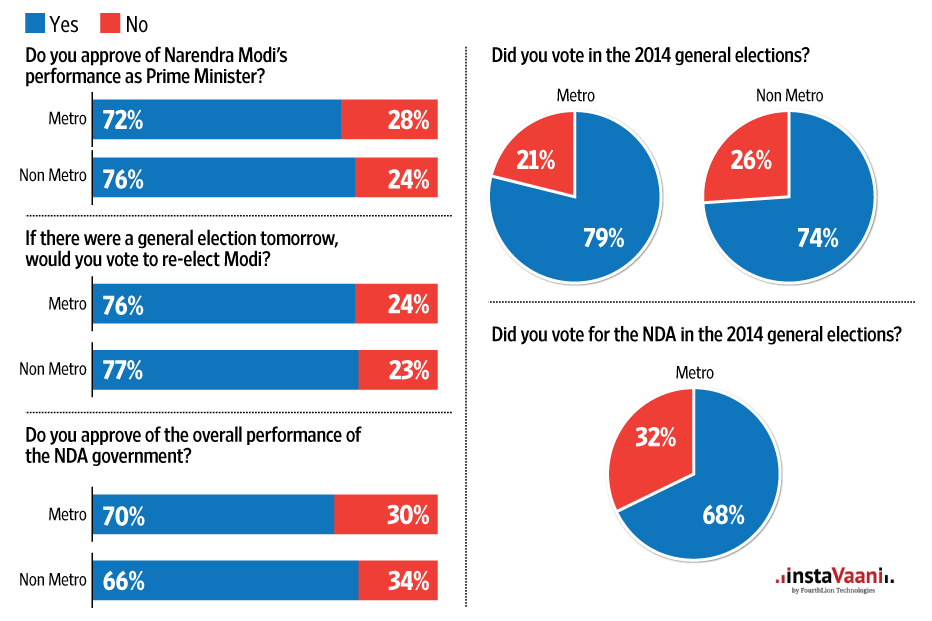 The latest InstaVaani produced some interesting insights. It showed that 85% of respondents who voted for the NDA in 2014 approve of Modi; only 70% of those who didn’t vote for the NDA do—still a very large proportion.

The large 15 percentage point difference indicates how people’s biases influence their judgements. It also can be interpreted as evidence that Modi is more popular than the NDA.

Among those that approve of both Modi and the government’s performance, 94% will vote to re-elect Modi if an election were to be held now.

And among those that approve of Modi but disapprove of the government’s performance, 81% will vote to re-elect Modi if an election were to be held now.

Of those that disapprove of Modi but approve of the government, only 38% will vote to re-elect Modi if an election were to be held now.

Of those that disapprove of both Modi and the government, about 10% will vote to re-elect him.