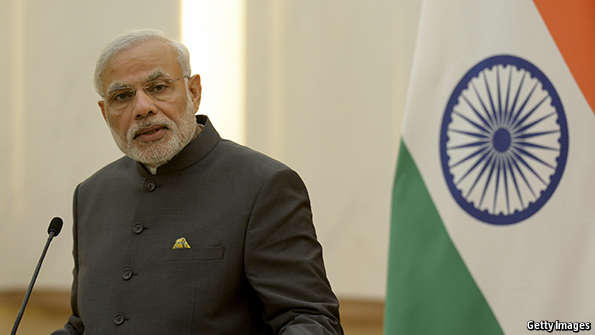 NARENDRA MODI became India’s prime minister almost a year ago, on May 26th 2014. Since then he has made many detailed promises, to be kept by set deadlines. The Economist has collated as many of these as possible in the table below. Around half relate to tasks to be done by 2019, the likely date of the next general election. Some are strikingly ambitious, such as improving India’s position on the World Bank’s “Ease of doing business” ranking from a woeful 142nd today to the top 50 by 2017. One or two have already been achieved, or are likely to be soon. For example a plan to open 75m new bank accounts by the end of January 2015 has been surpassed: some 150m accounts have been opened. A goal to have one billion Indians enrolled in the Aadhaar “unique identity” biometric database this year looks doable. These goals also reveal Mr Modi’s mentality as a leader: he sees himself in the mould of a CEO, or a taskmaster who sets concrete targets for others to implement.

The 30-odd items constitute a checklist to assess whether Mr Modi’s government is living up to its promises. Critics might dispute whether all are worth pursuing, such as a proposal for massive river-linking projects to divert fresh water to drought-prone areas, or a hugely expensive plan for high-speed trains (fixing low-speed ones is a greater priority). Others could grumble that worthy goals are not connected to the right projects. Attempting to end the widespread practice of open defecation is laudable: bad public hygiene leads to ill-health, poor nutrition, child mortality and more. But this requires a broad, thoughtful plan, to do with education and changing cultural habits, not just the government building 100m new toilets. Critics could also point to the fact that many important ambitions are missing. Your correspondent once suggested to Mr Modi he should have a plan to get Indian universities ranked in the top 200 in the world, but so far he has very little to say about higher education. Nonetheless, it is useful to track official pledges and see what is achieved.

Mr Modi’s style of leading through checklists is pragmatic, but not the same as setting out a vision. It appears to be the result of having led government at the state level, in Gujarat, for a dozen years. He told The Economist this month that “I had been chief minister for a long time, I am the first prime minister who was born in independent India, the first who has come to the post of prime minister with a long experience of being the chief minister of a state.” His administration was business-friendly and those who knew him well in Gujarat, a state of 60m, say he considered Singapore’s business-friendly former leader, Lee Kuan Yew, an “icon” to follow. But running a massive, federal country like India, with nearly 1.3 billion people and 36 states and territories, requires a different sort of leadership. However much he concentrates power in his own hands, he cannot oversee sufficient projects to transform India. Instead he needs to grow in the job, and articulate a bolder vision of what he would like to achieve, build a broad and capable team, then enable others to deliver it. Mr Modi needs to get beyond being a taskmaster and explain more clearly his broader sweep of goals.

He might set out, for example, what he understands by his phrase of “minimum government, maximum governance” and describe how he understands that markets could deliver more in India, rather than relying on overwhelmed government to do ever more. He should also explain a long-term narrative for how he would like to reform India, to make its economy grow faster. Mr Modi seems to expect he will be in office for more than one term, which would mean having time enough to effect profound change. As India grows, Mr Modi’s concept of leadership should evolve too.