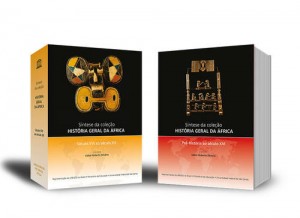 The government of Minas Gerais has distributed the summary in Portuguese of the General History of Africa Collection – entitled “Síntese da coleção História Geral da África” – to 2,211 primary and secondary public schools this year as part of the “African Awareness: school has everything to do with this history” national campaign, which was launched by the Minas Gerais State Governor, Fernando Pimentel in Belo Horizonte on 23 March, 2015.One of the focus of the campaign is the implementation of Federal Law 10.639, 2003, which became compulsory the teaching of African and African-Brazilian history and culture in schools nationwide. By May, 2015, all 3,679 public schools in Minas Gerais should have received the “Síntese da coleção História Geral da África”, which is the summary of the UNESCO General History of Africa Collection (GHA).

The summary is in two volumes. It was published in 2013 as a result of a partnership between UNESCO, the Ministry of Education and the Federal University of São Carlos (UFSCar) within the Brazil-Africa: Crossed Histories Project. “It’s a format that facilitates understanding and aids the implementation of the law,” says the Coordinator for Education at UNESCO in Brazil, Rebeca Otero.

Rebeca was at the launching of the “African Awareness: school has everything to do with this history” campaign and gave a copy of the summary to the Governor. The Superintendent for Methods and Special Subjects at the Education Secretariat of Minas Gerais State, Iara Félix Viana said that each school will receive six sets of the summary.

The efforts of Minas Gerais State Government in combating racism include a cooperation agreement with the President’s Secretariat for Racial Equality Promotion Policy (SEPPIR), which was also signed in the event.

Governor Pimentel pointed out that the majority of the young people encountering violent death in Brazil are Black. “Our commitment is to end this wound. And there is no better way to do that than to face the issue through Education, through teaching and guidance in schools and to end the disgrace of violent deaths of young Black people,” affirmed Pimentel. (Source: Information from the Minas Gerais Central Press Office).