Modi in China — The Best Step Forward: The Confidence Was Never So High

Away from the strict official positioning and stiff collars, Modi can make Chinese people look at India from a refreshingly new angle- culture and future. 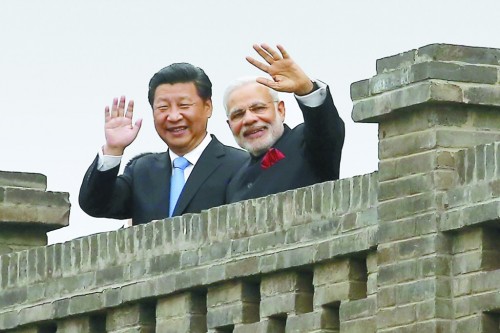 Prime Minister Narendra Modi’s China visit has come at a time when his govt is completing first year in power and global strategic equations are fast rearranging. At a time when India’s economy is gaining strength and world economists are declaring Modi-year as the best India has ever had economically, Modi walks in China as the most confident and powerful Prime Minister that has ever visited there. And with President Xi Jinping, considered to be the strong leader moulded in Deng Xio Peng’s school of thought, a courageous march of togetherness seems more possible than ever.

Nehru years with China were rooted in a mirage and ended in clouds of animosity and suspicion. Indira Gandhi never visited and Rajiv Gandhi did succeed in de-freezing the ties yet were not on a strong wicket. Vajpayee had the statesmanship to show an out of box approach, with formally accepting the TAR (Tibet Autonomous Region) as China’s integral part and getting Sikkim recognized by the Chinese as Indian state, and institutionalizing the mechanism to resolve border dispute through the appointments of Special Representatives (SRs). Later we signed the important joint document “A Shared Vision for the 21st Century” during Dr Manmohan Singh’s 2008 China visit. Dr Manmohan Singh’s second China visit in 2013 resulted in agreements on keeping border tranquil, exchange of data on trans-border rivers, cooperation for Nalanda University besides establishing sister city partnerships between Delhi-Beijing, Kolkata-Kunming, and Bangalore-Chengdu.

Prime Minister Modi is set to create new era in India China relations with focussing more on building trust and inviting Chinese investments. Whatever we say about the growing trade and bilateral exchanges, the fact remains the suspicion level remains high for each other which reflects in the complicated visa norms too. Modi is expected to break the ice and begin a fresh, confident and bold new phase of Vishwas — the trust that will pave way for future cooperation in an unprecedented manner. Once the trust begins to soar at the people’s level, nothing is impossible, said a high Chinese official in Beijing last month to me. Away from the strict official positioning and stiff collars, Modi can make Chinese people look at India from a refreshingly new angle — culture and future. Military and economy have always been two essential parts of diplomatic parleys, but this time Indian Prime Minister is a leader who has perfected the art of charming.

The Weibo initiative has not gone in vain. When a Hong Kong based Phoenix TV correspondent asked me in an interview about the critical remarks arriving on Modi’s Weibo account, I said that’s welcome as we are a democracy and know how to use this opportunity to explain the critical followers the correct position. She was surprised that we may even welcome critical remarks. That’s where Indians has the power to overcome hurdles. People and democracy! An order amidst criticism and chaos.

On economic front Modi will have to hard talk on balancing the huge trade deficit, which has risen to a whopping $37.8 bn. China’s economy is almost four times the size of India and their official military budget ($119 billion) is three times larger than ours. The huge aid to Pakistan their economic corridor linking Gwadar with Xinjiang and PLA presence on PoK concerns our security.

But should it be allowed to impact negatively on our biltaral ties with a neighbour that is indisputably more important than others? We may choose to remain enveloped in fears or begin a power-walk with confidence in our values and sinews. Modi has chosen the latter path.

An India that’s meticulously ensuring growing presence in ASEAN, continuing strengthening economy with long term allies like Japan and USA, building better ties with Middle East and Israel can happily build a bridge of cordiality and trust with a neighbour with whom we have had civilizational ties dating back to more than two millenniums.

The strategic issues remain high on the radar of both the countries and certainly it’s the maritime matter that draws great attention. But once a mechanism of cordiality is well oiled and functioning, the conflict fears can be turned into complementary positions too.

Modi’s India is doing best to create an atmosphere of walking together in the neighbourhood and in spite of all provocations, India has shown dexterity to keep cool while standing firm on its position with strength. With Modi working to have India move on the World Bank’s ‘Ease to Do Business’ index from number 142 to number 50, and foreign institutional investment for the 12 month period surpassing $47.2 billion i.e. up 640 per cent over the previous 12 month period, it is a different story this time. A billion people talking to another billion people, to walk, and dream together.

I have given a slogan to China tourism for encouraging more people’s exchanges that they liked – “Go China, Know China , Hello China”. It may get used for their campaign while first time post independence we may even introduce @ home Stat’ programme for Indian students in China and vice versa.

（Tarun Vijay: The breeze from Indus, a Shiva mantra at Kailas, a trek in Chushul and a chadar walk on frozen Zanskar. All this put together describes Tarun Vijay. He is a member of the Rajya Sabha. The blog revolves around everything that is Mother India and her concerns.)

« Premier presented with key to Rio» A Closer Partnership