Make in India: Xiaomi Looks to Set Up Unit in Andhra Pradesh

NEW DELHI: A hoarding put up by Xiaomi with ‘Make in India’ logo at Visakhapatnam airport, followed by a Facebook post, has sparked off speculation that the Chinese handset maker might set up its first India plant in Andhra Pradesh.

The company, however, did not reply to queries whether it was planning to set up a manufacturing plant in Andhra Pradesh.

Posting a picture of the hoarding, Xiaomi Vice President Hugo Barra said: “GOOD MORNING VIZAG! This is what you see as you walk out of the Visakhapatnam airport arrival terminal this weekend. We’re about to take a huge step forward here in India! Can you take a guess?” 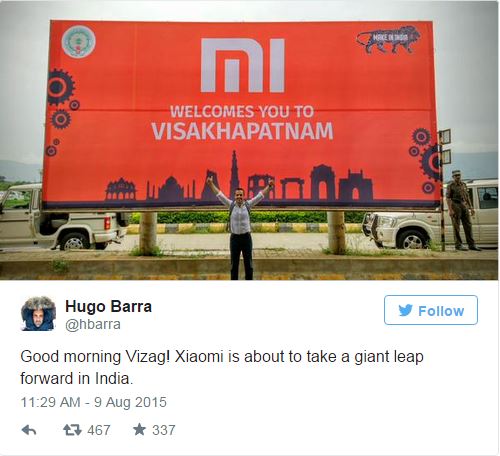 While the company has not made any official announcements about its manufacturing plans in India, it has put up a hoarding with a ‘Make in India’ logo welcoming arrivals at Vishakapatnam airport.

In the past, Xiaomi has said it is exploring options for manufacturing in India. With this, the Chinese firm will join the list of other smartphone makers like Asus, Motorola and Gionee that are considering manufacturing in India, where the government is pushing its ‘Make in India’ initiative.

India is one the fastest growing smartphone markets globally.

According to research firm CMR, 19.5 million smartphones were shipped in India in the March 2015 quarter.

Xiaomi, which entered the Indian market last year, said it had sold one million units till end of 2014.

While it had forayed into the Indian market through the online route in partnership with eCommerce giant Flipkart, Xiaomi has gradually expanded availability with Snapdeal and Amazon early this year.

It has also started selling smartphones at brick and mortar stores through partners like the Mobile Store, Airtel and the recently announced tie up with Redington.