BENGALURU: India remains the No. 1 location for MNCs to establish product engineering and R&D centres outside their home countries, and the growth of these centres in India is outpacing the average global growth.

India accounted for $12.3 billion, or 40%, of the total of $31billion of globalized engineering and R&D in 2015, according to a study by consulting firm Zinnov. Compared to 2014, the revenues of the captives in India grew by 8.3%, as against the growth of 7.6% for all captives. China follows India with revenues of $9.7 billion. 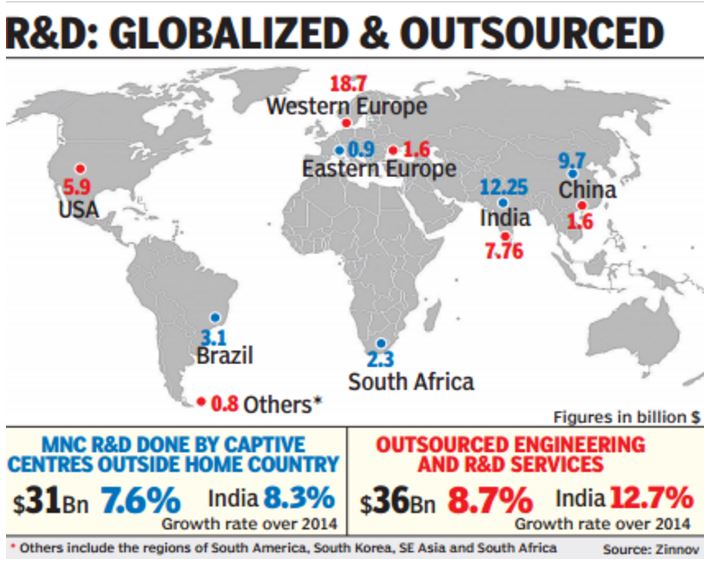 Zinnov, which has been focused on this space since it was founded over a decade ago, finds that 69% of all new offshore technology centres this year were set up in India. The past two years have seen a spate of new centres being set up and the older ones expanding, including those of Exxon Mobil, Lowe’s, Visa, Victoria’s Secret, JC Penny, CME Group, Wells Fargo, and British Telecom.

Software & internet accounts for 35% of the work being done in the captives, telecom & networking follows with 14% and semiconductors 12%. Consumer electronics, automotive, computer peripherals, medical devices, industrial, and aerospace & defence are other areas of work.

Zinnov finds another interesting trend: engineering and R&D outsourcing to third parties is beginning to outpace growth of captives in India. India is the second biggest outsourcing destination, after Western Europe, where companies like Altran, Alten, Akka Technologies, Assystem and Harman Connected Services are strong.

“Five years ago, the growth was coming primarily from captives. Now, the captives have matured, and it is the third-party service providers who are growing faster,” Sidhant Rastogi, partner in Zinnov, said. While captives do more of the work they consider proprietary and those that involve new technologies, they outsource a lot of the rest of the work.

Independent software vendors and telecom outsourcers dominated the outsourced pie. But the fastest growth came in the automotive, software and medical segments, the first thanks to the trend towards connected cars and change in labour laws in Germany.

TCS, Wipro and HCL Technologies have traditionally been the leading players in this space. “However, Infosys, Tech Mahindra, L&T and Aricent are giving good competition to the top 3. Even European players like Altran and Alten are setting up centres in India,” Rastogi said.