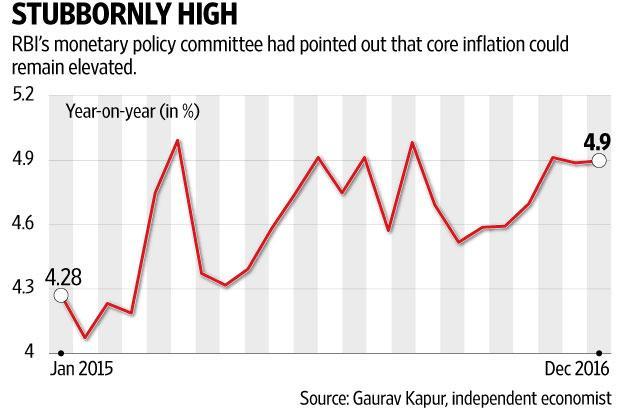 Inflation measured by the Consumer Price Index (CPI) eased to 3.41% in December versus 3.63% seen in November 2016. The decline in headline CPI inflation was mainly due to softening of food prices. Prices of vegetables and pulses slipped month-on-month— the former by 11.7% and the latter by 1.6%.

Though prices of these items tend to soften during winter months, this time around demand took a beating as consumers were still coping with the cash crunch on account of demonetisation. However, the stickiness in core CPI inflation seen in the December 2016 print indicates this component has not seen much of a reaction due to the note ban.

Meanwhile, surging crude oil prices have started to reflect in higher fuel prices. According to some economists, the non-food price indices for clothing, housing, and miscellaneous items that have witnessed inflation in the region of 4-5% are a cause for concern. Recall that the Reserve Bank of India (RBI) had raised concerns about the continued stickiness in core inflation at its last monetary policy meeting.

While saying that the impact of demonetisation would be transitory and monetary policy needed to look beyond its effects, the central bank had also said that a “disconcerting feature of recent developments is the downward inflexibility in inflation excluding food and fuel which could set a resistance level for future downward movements in the headline”.

Going ahead, expectations are that CPI or retail inflation would see an increase but is likely to remain under RBI’s projection. The central bank and the government set a retail inflation target of 4% for the next five years with an upper limit of 6% and lower limit of 2%.

Given the inflation target, an interest rate cut of not more than 25 basis points is anticipated over the next few months, provided the Union budget keeps the fiscal deficit within control. In any case, the banks have already delivered a sharp cut in interest rates even without RBI’s prompting.