New Delhi: Indian Institute of Science, (IISc) Bangalore, has emerged No. 5 in a ranking of 404 universities in the BRICS (Brazil, Russia, India, China and South Africa) region. This is the first time any Indian educational institution has broken into the top 10 of the rankings published by London-based QS, previously known as Quacquarelli Symonds.

This is the first time IISc has submitted data for the QS ranking. In 2014, IISc did not formally provide the data, and was ranked 13. When a university does not provide data, QS sources data available from websites, employers and peers.
However, the clear leader in the QS BRICS university rankings, released in Delhi on Wednesday, is China. Tsinghua University, Peking University and Fudan University from India’s northern neighbour occupy the top three ranks in the QS survey. Russia’s Lomonosov Moscow State University is at No. 4, followed by IISc. In total, there are 110 Chinese universities among the top 400 and 67 among the top 200. For India, the corresponding numbers are 94 and 31.
“India has seen a rise of more than 50% in the number of institutions listed in the latest ranking of the top 200 universities in BRICS countries,” QS said in its ranking booklet. “The Indian Institute of Science has come straight into the ranking in the top five in the first year in which it has submitted a full set of data.”
“We are considered the best research-oriented university. It feels good to be in the top 10 list among BRICS universities, but we would like to be in the top 100 list of world university ranking,” said Govindan Rangarajan, chairman of division of interdisciplinary research at IISc. 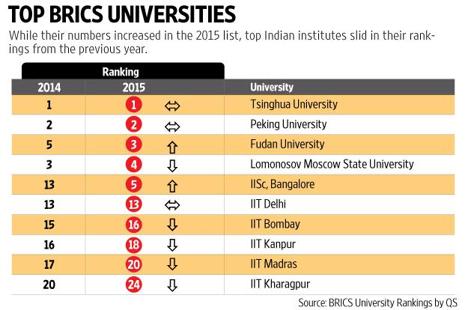 Including IISc, there are five Indian institutions in the top 20.
Indian Institute of Technology (IIT) Delhi is at the 13th rank, same as last year. IIT Bombay, at 16th place, dropped one place from last year. IIT Kanpur at 18th place and IIT Madras at 20th place are the others in the top 20 of the rankings.
The University of Mumbai has made the maximum progress in the top 100 list. It jumped from 68th position last year to 58 this year.
The University of Calicut progressed nearly 100 places to reach the 100-110 bracket from the previous 200-plus bracket.
Similarly, Aligarh Muslim University and the National Institute of Technology, Rourkela, have made significant progress from the outside-200 list to 110-120.
After ranking the top 100 institutions, QS gives ranking in brackets of 10.
Balvinder Shukla, vice-chancellor of privately run Amity University, said Indian universities can enter the top 200 list, provided they supply enough data to the ranking agency. Amity has been ranked in the 141-150 bracket, the same as last year. “Structured data supply, improvement in research papers, and its publication, are getting attention of academicians in India of late, and they have realized that by doing so, their own brand value will grow internationally,” she said.
Karthick Sridhar, vice-chairman of Indian Centre for Academic Rankings and Excellence, which helped QS in India in the ranking process, said more Indian universities participated in the ranking process this year and gave required information leading to better performance. “If the trend continues, then their ranking shall certainly improve in the world university rankings, but Indian universities need to better their performance in two key areas—academic reputation and employer reputation, other than research paper publications,” he said.
No Indian university features in the separate rankings of top 200 world universities, published by QS, or Times Higher Education, another international ranking agency in London.
« A BRICS vision for the internet?» Xi calls for stronger Sino-Indian BRICS partnership