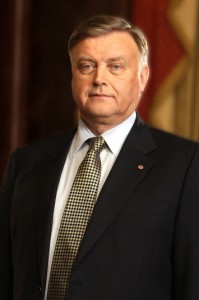 President of jsc russian railways, chairman of the management board

Vladimir Yakunin was born on June 30th, 1948, in Melenki, Vladimir Region. In 1972 he graduated from Leningrad Institute of Mechanics. He started the working career as a junior researcher at the State Institute of Applied Chemistry. After completing military service in the Soviet Army, he worked as an engineer, senior engineer at the Directorate of the State Committee of the Council of Ministers for Foreign Economic Relations, and as a Head of Department at the Ioffe Physical Technical Institute at the Academy of Sciences of the USSR. He is married and has two sons. Positions Mr. Vladimir Yakunin held so far In 1985–1991 worked in the diplomatic service (Second and then First Secretary of the Permanent Mission of the USSR to the United Nations). Later was Chairman of the Board of Directors of the CJSC International Business Cooperation Center and head of the Northwestern Federal District Inspectorate of the Main Control Directorate of the President of the Russian Federation. In October 2000 became the Deputy Minister of Transport of the Russian Federation. In February 2002 was appointed First Deputy Minister of Railway Transport. In October 2003 became the First Vice-President of JSC Russian Railways. On June 14th, 2005 was appointed President of JSC Russian Railways. On 12th June 2008, has been reappointed President of JSC Russian Railways. Mr. Yakunin also operates in the following capacities: Chairman of the Board of Trustees of the Center of National Glory and the Foundation of St. Andrew the First-Called. Founding president of the World Public Forum Dialogue of Civilizations. Co-president of the Association Dialogue Franco-Russe. Scientific Director and Chairman of the Board of Trustees of the Governance and Problem Analysis Center, Russian Academy of Sciences (www.rusrand.ru). Head of the Department of Government Policy at the Faculty of Political Science at Moscow State University named after M. Lomonosov. Chairman of the Board of Trustees of the Child Welfare Foundation “Spread Your Wings!”. Member of the Board of Trustees of “Russkiy Mir” Foundation. Member of the Management Bureau of the Russian Union of Industrialists and Entrepreneurs. Chairman of the Commission on Transport and Transport Infrastructure. Doctor of Political Sciences; visiting professor at the Stockholm School of Economics. Honorary Doctor of the Diplomatic Academy of the Ministry of Foreign Affairs of the Russian Federation. Chairman of the International Union of Railways (UIC). Chairman of the Board of Directors of GEFCO. Director of Centre for scientific research and implementation of the mega-project Integral Eurasian Transportation System (under the auspices of the Russian Academy of Sciences). Mr. Yakunin’s Awards Vladimir Yakunin was awarded the Order for Merits to the Fatherland IV class, and medals For Combat Merits, and For the Development of Railways. He was awarded the Order of the Russian Orthodox Church of Stequal-to-the-apostles Prince Vladimir II class, St. Seraphim II class, St. Andrei Rublev Ist class, and the Order of the Council of Muftis of Russia Al-Fahr I class. For his significant contribution into the development of dialogue between civilizations of peoples and organization of the Pan-Orthodox prayer “Pray for the Peace of Jerusalem,” he was conferred the Order of the Holy Sepulcher by the Jerusalem Orthodox Church. He was awarded the highest distinction of the French Legion of Honor, Great Medal with a Gold Star for his services to the Republic of Austria, the Dostyk Order (highest award of the Republic of Kazakhstan), and the Order of Merit of the Italian Republic at the rank of the Grand Officer. He was awarded a sigil Honorary Railwayman of JSC Russian Railways. He was awarded the International Faith and Loyalty Prize of St. Andrew the First-Called in 2000 for his contribution to the strengthening of the Russian state and his active participation in creation of the Center of National Glory. He was awarded the Gold Medal by La Renaissance Française for his contribution into the development and strengthening of Russian–French relations. He was awarded a Civil Merit Order at the rank of the Grand Cross by the Kingdom of Spain. He was awarded The Globalisation for the Common Good Initiative Award for Public Service in the Interest of the Common Good (GCGI, United Kingdom). He is a laureate of the Russian Federation Government prize in the field of science and technology. Has been awarded a golden medal “For Merits” of the Republic of Serbia for organization of humanitarian aid to Kosovo and Metochia Awarded Order of Friendship For a significant contribution into the preparation and conduction of XXII Winter Olympic Games and XI Paralympic Winter Games on Sochi, Mr. Yakunin was distinguished with an Order of Alexander Nevskiy.

JSC RUSSIAN RAILWAYS PROFILE Joint-stock company Russian Railways (RZD) was established in 2003 on the basis of the Ministry of Railways as part of the programme to reform the Russian railway sector. At present, Russian railways continues to progress as an effective transport holding company. The current structure of the Russian Railways holding company consists of a parent company (JSC Russian Railways), its subsidiaries and affiliates. Its largest subsidiaries are leaders in their market segments: JSC TransContainer in containerized cargo transportation, and JSC Federal Freight in train cars operation. Since the beginning of the industry’s reforms, a significant part of Russian Railways’ assets has been restructured, and over 80 subsidiaries and affiliated companies created in such fields as passenger transport, rolling stock maintenance, manufacturing, freight cars operation, engineering and design, logistics and scientific activities. RZD has representative offices in 11 countries: Hungary, Germany, China, North Korea, Poland, Slovakia, Ukraine, Finland, Estonia and France. The company also recently completed the registration process for the office in Belarus. JSC Russian Railways is the largest transport company in Russia. One of the high-priority tasks for the company is the maximal expansion of scientific and technical cooperation with foreign partners, provision of the localization of production and implementation of clean and energy-efficient technologies. The Business Activities of the company are: –      freight transport; –      long-distance passenger transport; –      suburban passenger transport; –      provide infrastructure services; –      provide locomotive traction; –      repair rolling stock; –      construct infrastructure facilities; –      research and development activities; –      social responsibility. The Company’s corporate values are: –      open and honest relationships with government bodies, corporations and individuals; –      clear and mutually beneficial relationships with partners, customers and suppliers of goods, works and services; –      financial transparency; business development based on social responsibility; –      to ensure the high quality of services rendered and their conformity with international standards; –      a constant search for ways to improve competitiveness and efficiency of services provided; –      a respectful and caring attitude to people; –      a commitment to modern international standards of corporate governance.   For further information please visit http://eng.rzd.ru/main-eng/public/en