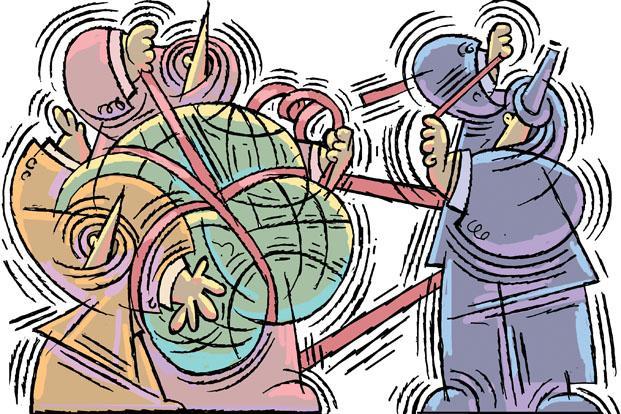 The spectacular rise of China has been arguably the most important geopolitical development of the past three-and-a-half decades. The concomitant changes in the strategic behaviour of Beijing have forced major powers around the world to take notice, resist, adapt and adjust. After studying the history of the past 500 years, Prof. Graham Allison of Harvard Kennedy School sets the record straight: of the past 16 instances when a rising power has challenged a ruling power, 12 have ended in war. Avoiding a war between the US and China, therefore, will require—according to Allison—“nothing short of bending the arc of history”. To be sure, the prospects of a US-China face-off seem slightly overhyped despite Allison’s warnings. But the significance of China’s rise and its fallout cannot be overstated.

In recent years, China has grown far more assertive in its maritime boundary claims in the East and South China Seas. Partly owing to the slow pace of reforms in international financial institutions and partly to excess capacity at home, Beijing has taken the lead in creating new financial institutions. The Asian Infrastructure Investment Bank (AIIB) has produced fissures between the US and some of its European and Asian allies. China is also leading efforts to form a New Development Bank (NDB) along with India, Brazil, Russia and South Africa and an SCO bank along with members of the Shanghai Cooperation Organization. But one of its most important steps to make the “Chinese dream” a reality is its “One Belt One Road” (OBOR) initiative.

First unveiled by President Xi Jinping in a speech delivered at the Nazarbayev University during his visit to Kazakhstan in 2013, OBOR aims to achieve greater economic integration with the countries encompassing the three continents of Asia, Africa and Europe. Paradoxically named, the “road” is actually the maritime route connecting the Indian and Pacific Oceans and the “belt” comprises highways, railways, and telecom, oil and gas pipeline projects from coastal China to Europe via Central and West Asia.

While Beijing denies any geopolitical intent behind the OBOR initiative, many commentators do not buy this theory and compare it to the Marshall Plan announced by the US after the Second World War to help rebuild war-torn European economies and contain the spread of communism. OBOR and its geopolitical aspect will have significant consequences for India. While sharing the same strategic space, India and China are party to Asia’s largest territorial dispute. Far from evolving contingency responses to a potential US-China face-off, New Delhi has yet to figure out a coherent response to OBOR.

While India can participate in the OBOR programme to bridge its own yawning infrastructure deficit and get integrated with other economies in South and South-East Asia, it is nevertheless worried about a Chinese encirclement in its traditional sphere of influence. India’s dilemma is best captured by its different response to the BCIM (Bangladesh-China-India-Myanmar) corridor and the China-Pakistan Economic Corridor (CPEC)—both of which, for China, fit within its larger OBOR strategy. New Delhi has, of late, shed its hesitation over the former but finds the latter, passing through Pakistan-occupied Kashmir, absolutely “unacceptable.” To complicate matters further, India is the second largest stakeholder in the AIIB and the NDB, both of which are likely to be important lenders for the projects envisaged as a part of the OBOR strategy.

India’s own attempt at providing an alternative to the Chinese maritime Silk Road—Project Mausam/Spice Route/Cotton Route—has proven to be a non-starter. Its older commitments of building a port in Chabahar (in Iran) and a rail line from the port city towards Afghanistan have been moving at a snail’s pace. Without the deep pockets of China, and failed by its own bureaucratic lethargy, New Delhi is expected to be a major collaborator in Japan’s new initiative called “Partnership for Quality Infrastructure” (PQI).

While it will benefit from its privileged position in both AIIB and NDB, New Delhi might now find it too late to extract Chinese concessions on CPEC in return for support on OBOR. India has to decide if it wants to cooperate with China on OBOR regardless, or if it will float a competing vision altogether, possibly in partnership with the Japanese PQI. If it chooses to remain ambivalent, its transition from a balancing power to a leading power—the stated foreign policy aspiration articulated on multiple occasions by foreign secretary S. Jaishankar—will not have begun.