China’s Export Machine Is Grabbing More of the Global Market 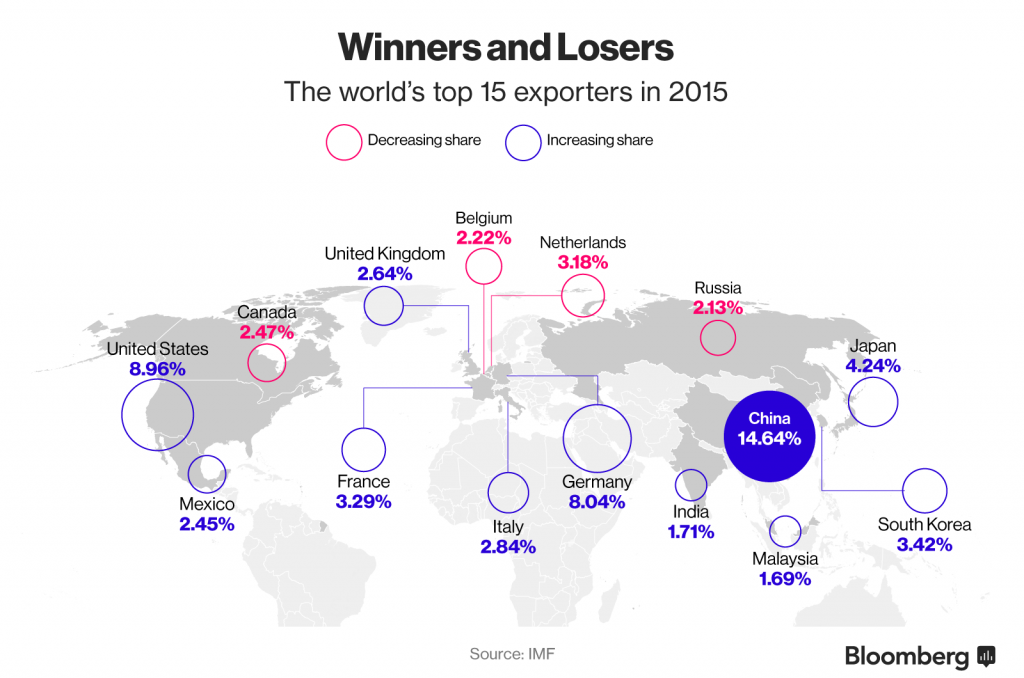 China is eating up a larger chunk of the world’s shrinking trade pie.

Brushing off rising wages, a shrinking workforce and intensifying competition from lower cost nations from Vietnam to Mexico, China’s global export share climbed to 14.6 percent last year from 12.9 percent a year earlier. That’s the highest proportion of world exports ever in International Monetary Fund data going back to 1980.

Yet even as its export share climbs globally, manufacturing’s slice of China’s economy is waning as services and consumption emerge as the new growth drivers. For the global economy, a slide in China’s exports this year isn’t proving any respite as an even sharper slump in its imports erodes a pillar of demand.

Those trends are likely to be replicated in August data due Thursday. Exports are estimated to fall 4 percent from a year earlier and imports are seen dropping 5.4 percent, leaving a trade surplus of $58.85 billion, according to a survey of economists by Bloomberg News as of late Tuesday.

While China’s advantage in low-end manufacturing has been seized upon by Donald Trump’s populist campaign for the U.S. presidency, the shift into higher value-added products from robots to computers is also pitting China against developed-market competitors from South Korea to Germany. A weaker yuan risks exacerbating global trade tensions, which became a hot button issue at the G-20 meeting in Hangzhou over cheap steel shipments.

“All the talk we have heard over the last few years about China losing its global competitive advantage is nonsense,” said Shane Oliver, head of investment strategy at AMP Capital Investors in Sydney. “This will all further fuel increasing trade tensions as already evident in the U.K. with the Brexit vote and in the U.S. with the support for Trump’s populist protectionist platform.” 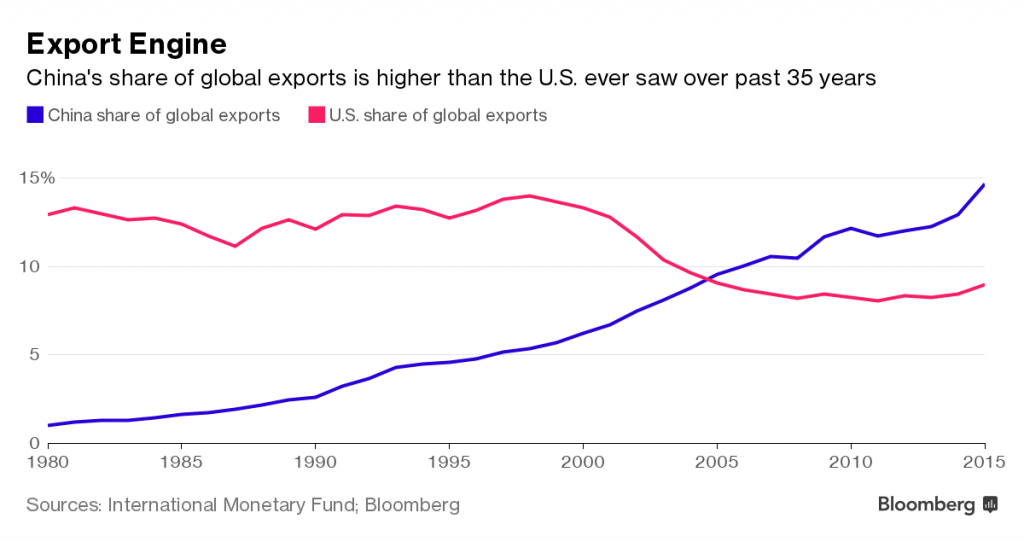 China is also facing opposition to its global shopping spree and calls from bodies such as the European Union Chamber of Commerce in China for improved market access.

A key driver of China’s export share gains is its move toward more sophisticated assembly, especially in electronics, which eliminates the need to source components from a vast supply chain across Asia, said Frederic Neumann, co-head of Asian economic research at HSBC Holdings Plc in Hong Kong. That’s hurting companies and economies from Singapore to Thailand, Malaysia, Taiwan and South Korea, said Neumann.

The government is subsidizing higher technology industries including new advanced information technology, robotics, and new energy vehicles under its “Made in China 2025” plan. More is to come as President Xi Jinping’s blueprint envisions global competitiveness within a decade in 10 industries from machine tools and robots to advanced railway equipment and medical devices.

China increasingly is turning into an economic rival as it pushes to produce higher-value exports, said German Chancellor Angela Merkel on a trip to the nation in June. Those stern words from the leader of China’s fifth biggest trade partner pale in comparison with the rhetoric from Trump, who has accused China of raping the U.S. in “the greatest theft in the history of the world.”

“Political support for open trade and investment is evaporating globally and no one has more to lose than China,” said David Loevinger, a former China specialist at the U.S. Treasury who is now an analyst at fund manager TCW Group Inc. in Los Angeles. “China has become the bogey man for opponents of globalization.”

At the G-20 meeting in Hangzhou “China took a drubbing behind the scenes over its steel exports, which have flooded global markets and become a symbol of trade imbalances that have fed resentment across nations,” said Pauline Loong, managing director at research firm Asia-analytica in Hong Kong. “Protectionism is China’s biggest worry.”

The latest IMF data for the first quarter of this year shows China’s market share edged down in January and February — notoriously volatile months because of a week-long Lunar New Year holiday — and bounced back again in March, indicating the nation’s manufacturers are set to at least hold on to previous gains. Last year, the U.S. also increased its share while Russia was the biggest decliner among the top 15 exporters as oil prices fell.

Manufacturing exports from Northeast Asian countries China, Japan, South Korea and Taiwan have turned a corner and are on a recovery track in the second half, said Louis Kuijs, head of Asia economics at Oxford Economics in Hong Kong, in a note Wednesday.

“Momentum has clearly improved after having bottomed out in early 2016,” said Kuijs. “There are several reasons to warn against getting too excited about the outlook. But the shared turnaround is welcome anyway.”

A stronger-than-expected recovery in exports in the first half has been helped by yuan depreciation, wrote analysts He Wei and Guo Haiyan at Beijing-based China International Capital Corp. in a Sept. 5 note. Chinese companies with strong competitiveness, including household goods maker Midea Group Co., which is buying German robot-maker Kuka AG, have begun to emphasize global expansion, they said.

But it’s not all upside for China. While it’s successfully transitioning into medium-end technologies, it has yet to make the leap into high-value-added exports, says Andrew Polk, Beijing-based head of China research at Medley Global Advisors, which advises hedge funds and other institutional investors.

“Maybe they can, but it remains an open question,” he said. “The highest value-add is in intangible items like branding. Right now, there is not really a globally branded Chinese company that stands for high quality.”

Yet even without its own Coca-Cola, Nike or Apple equivalent on the world stage, China’s export juggernaut is winning by default as other major exporters fall behind.

“After having come this far I see no reason why China’s march up the value-chain would suddenly stop,” said James Laurenceson, deputy director of the Australia-China Relations Institute at the University of Technology in Sydney. “Chinese companies are competing outside their home base against the best in the world, and winning. This points to a hyper-competitive manufacturing sector, not one losing its shine.”