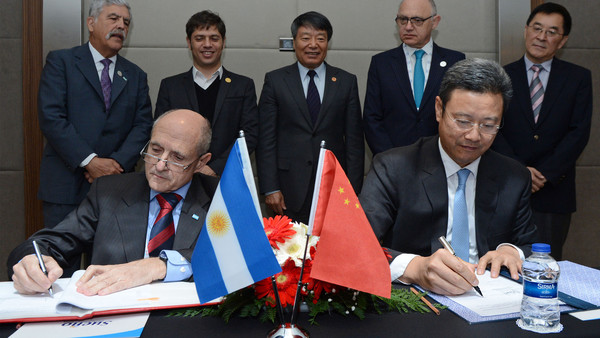 China will finance and build two nuclear power plants in Argentina in a deal worth up to $15bn, underlining Beijing’s continued presence in Latin America despite its slowing economy.

The deal comes amid a push to export China’s homegrown atomic technology, often by offering cheap technology and generous financing. It follows China’s move last month to take a one-third stake in a French-led project to build the first in a new generation of UK nuclear plants.

The agreement with Argentina, signed in Turkey during the G20 meetings, will see China provide most of the financing for the two new plants at a time when Buenos Aires is locked out of global credit markets.

The Sino-Argentine nuclear deal comes days ahead of Argentine presidential elections on Sunday which the centre-right and pro-business mayor of Buenos Aires, Mauricio Macri, is the favourite to win. Mr Macri is expected to sweep aside many of the protectionist policies followed by Cristina Fernández de Kirchner, the president.

The first plant will cost about $6bn and use Canadian “Candu” nuclear technology, while the second will use China’s homegrown Hualong One reactor, which Beijing is promoting for export.

“The construction of two new nuclear power plants will ensure our energy supply in the future,” Axel Kicillof, Argentina’s economy minister, told Argentine media. The agreements “are very favourable” and will “give us energy and competitiveness”, he said.

Buenos Aires has been one of Beijing’s larger clients, with $19bn of lending for Chinese-led infrastructure projects since 2007, according to the Inter-American Dialogue’s China database.

Although China has started to scale back its exposure to more risky Latin American borrowers, such as Venezuela, it provided an $11bn currency swap arrangement last year to bolster Argentina’s sagging reserves.

Both reactors will be built by state-owned China National Nuclear Corp in co-operation with Argentina’s state-owned Nucleoeléctrica. When finished, they will roughly double the country’s nuclear power capacity provided by its existing three nuclear plants.

Chinese banks and companies will provide loans and investment to cover 85 per cent of the projects’ costs, with the loans to be paid back over 18 years with an annual interest rate below 6.5 per cent, according to Argentine media.

CGN has already agreed to take a one-third stake in the French group EDF’s £18bn Hinkley Point power station, and wants to build a series of new reactors in the UK.

Analysts say success in exporting its nuclear technology to Britain will help China sell more nuclear plants around the world because of the perceived rigour of the UK’s regulatory regime.

“We have our first foot in the UK,” Zheng Dongshan, senior vice-president at CGN, said during a visit to Britain last month. “This could have a good effect to kick the door of other countries.”

Chinese economic planners have identified more than 60 countries between China and Europe as potential customers. They hope to provide 30 of the 200 nuclear plants they estimate will be under construction in those countries by 2030.

Back home, China already has 26 reactors under construction, eight of which it plans to complete by the end of this year.

In recent years Beijing has stepped in to provide financing and investment to several countries locked, like Argentina, out of international credit markets or shunned by global investors because of war, sanctions or corruption.

Latin America has been an area of particular interest to China because of the ruling Communist party’s desire to expand Chinese influence into America’s traditional “backyard”.

China has already made enormous investments throughout Latin America, including in ports, dams, railways and energy projects in Argentina.

Some in Argentina have raised concerns about the country’s growing reliance on China and Buenos Aires’ decision to sign the deals just before a presidential electoral runoff, after which Ms Fernández will step down at the end of her second term.

Mr Macri has promised to review all agreements signed between the current government and Beijing if he wins the November 22 run-off.