China and India are adding fresh momentum to the establishment of the Bangladesh-China-India-Myanmar (BCIM) economic corridor, which is expected to develop gradually before more ambitious goals are achieved. 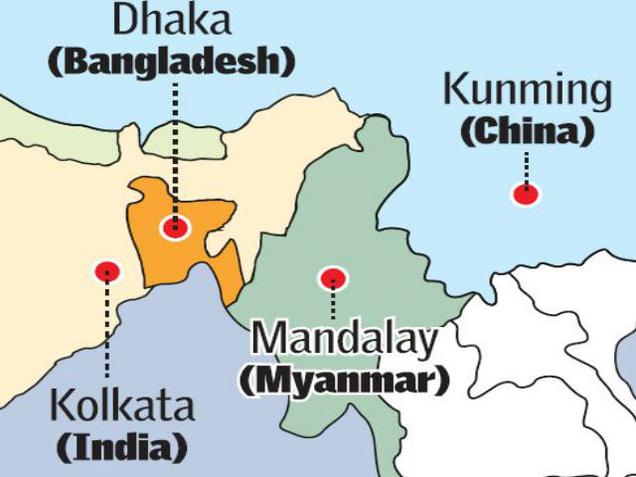 Chinese officials acknowledge that unlike in the past, when it was perceived to be dragging its feet, India is now showing enthusiasm over the project, which will link Kolkata with Kunming, the capital of China’s Yunnan province, passing through Myanmar and Bangladesh, with Mandalay and Dhaka among the focal points. The focus on linking provinces and States — in this case, Yunnan and West Bengal — seems to have given a new impulse to galvanising the plan.

The main artery of the 2,800-km, K (Kolkata)-2-K (Kunming) corridor is nearly ready. A stretch of less than 200 km, from Kalewa to Monywa in Myanmar, needs to be upgraded as an all-weather road.

Corridor will provide access to sea for north-eastern States

In a free-wheeling conversation at the International Regional Cooperation Office of Yunnan, its Deputy Director-General Jin Cheng said the main artery of the 2,800-km, K (Kolkata)-2-K (Kunming) corridor is nearly ready.

“A stretch of less than 200 km, from Kalewa to Monywa in Myanmar, needs to be upgraded as an all-weather road. The second is the segment between Silchar in Assam and Imphal in Manipur, which India is upgrading,” he said.

From the West Bengal capital, the corridor will head towards Benapole, a border crossing town in Bangladesh. After passing through Dhaka and Sylhet, it will re-enter the Indian territory near Silchar in Assam. The rest of the passage will be connected with Imphal and then pass through the India-built Tamu-Kalewa friendship road in Myanmar.

Mandalay will be the next focal point of the corridor before the road enters Yunnan, after crossing Lashio and Muse in Myanmar. The Chinese stretch extends from Ruili before reaching Kunming through Longling and Dali.

The central corridor can be connected with two supplementary passages to the north and the south. Starting from Kunming, the northern passage heads towards Myitkyina, capital of Kachin state in Myanmar, before extending to Ledo in Assam. After crossing Dibrugarh and Guwahati, this road enters northern Bangladesh and joins the central corridor inside the country, before reaching Kolkata.

At present, this route is problematic because it enters a small portion of Arunachal Pradesh over which India and China have a territorial dispute. Besides, a part of this stretch is insurgency-prone, and therefore unsafe.

The Chinese official pointed out that the BCIM corridor would be incomplete without drawing Mizoram into the framework through the Kaladan multi-modal transit transport project. Under this plan, Mizoram would be connected with Myanmar’s port of Sittwe, through the Kaladan River, and the passage will provide all the landlocked north-eastern States access to the sea. Compared with the land route, Sittwe provides these States access to Kolkata, just 539 km away.

Mr. Jin acknowledged that one of the strategic factors driving the corridor was reduction of reliance on the Straits of Malacca, militarily dominated by the U.S.

« Centre to Hold Parleys with States on E-Commerce» BRICS Bank to Be Operational by End of 2015: South Africa