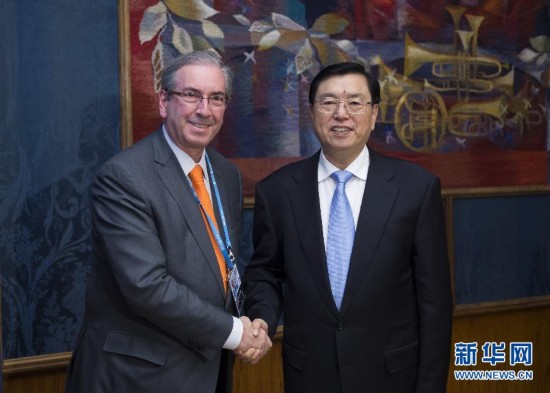 MOSCOW — China’s top legislator Zhang Dejiang met in Moscow Monday with Brazilian Chamber of Deputies President Eduardo Cunha and the two pledged to step up cooperation between their countries’ legislatures.

China has always treated its relations with Brazil as a foreign policy priority, said Zhang, chairman of the Standing Committee of the National People’s Congress (NPC).

In recent years, the China-Brazil relationship has witnessed rapid and comprehensive development, with its strategic significance steadily on the rise, he noted.

The NPC attaches great importance to strengthening friendly cooperation with the Brazilian Chamber of Deputies, said Zhang, expressing the hope that the two sides could make full use of various platforms so as to jointly promote the China-Brazil comprehensive strategic partnership.

Zhang and Cunha are both in Moscow for a parliamentary forum of the emerging-market bloc of BRICS, which groups the two countries along with Russia, India and South Africa.

At the forum, the five countries pledged to put parliamentary cooperation into full play so as to make positive contributions to the deepening of BRICS cooperation.