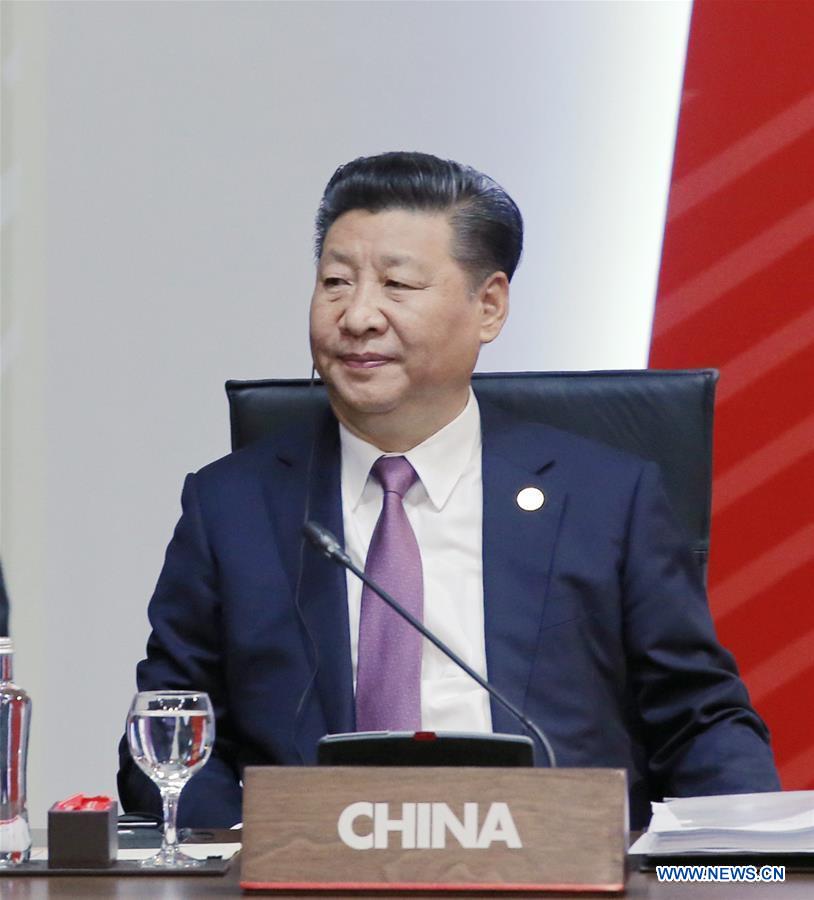 Speaking at the 24th APEC Economic Leaders’ Meeting here in Peru, Xi highlighted the APEC’s role as a pioneer, leader and trailblazer of economic cooperation in the Asia-Pacific and the world at large, and called on APEC members to leverage the Asia-Pacific’s role as a growth engine and work for an innovative, invigorated, interconnected and inclusive world economy.

At the high-level gathering of APEC economic leaders, Xi urged the APEC economies to stay committed to taking economic globalization forward, increasing openness in the Asia-Pacific economy, breaking bottlenecks in regional connectivity and blazing new trails in reform and innovation.

Citing the blueprint for strong, sustainable, balanced and inclusive world economic growth produced by the G20 Hangzhou Summit in September, the Chinese president said it embodies the spirit of partnership to jointly rise to challenges as well as the commitment to common development.

“Instead of coming to a stop because of the temporary difficulties, we need to continue our involvement in economic globalization. What is important is to combine it with our respective development practices, strive to ensure equity and justice, and steer it towards a more inclusive and mutually beneficial direction,” he said.

On the building of a Free Trade Area of the Asia-Pacific (FTAAP), which was launched at the 2014 APEC meeting in Beijing, Xi hailed the smooth completion of the collective strategic study this year, saying it marked a new phase in FTAAP development.

“We need to stick to our agenda and take more effective actions to realize the FTAAP at an early date, thus bringing about an Asia-Pacific economy with greater openness,” said the Chinese president.

Calling on APEC members to take more collective and individual actions to implement the Connectivity Blueprint for 2015-2025 adopted in Beijing and promote connectivity in infrastructure, institutions and personnel flows, Xi underlined the need for a multi-dimensional connectivity network and a well-connected Asia-Pacific community.

China is making progress with the Belt and Road Initiative. Featuring extensive consultation, joint participation and shared benefits among partners in the region, Xi said the initiative will contribute to enhanced connectivity in the Asia-Pacific, and pledged to seek synergy in development strategies and cooperation initiatives with relevant parties.

The Belt and Road Initiative refers to the Silk Road Economic Belt and the 21st-Century Maritime Silk Road initiative proposed by Xi in 2013. The initiative brings together countries in Asia, Europe and Africa via overland and maritime networks.

Xi recalled that China has given priority to opening up to the Asia-Pacific over the past 25 years since it joined the APEC, and pledged to work with other parties to increase openness, pursue regional economic integration and connectivity, advance reform and innovation, and jointly write an exciting chapter of Asia-Pacific cooperation.

The economic leaders’ meeting continued in the afternoon and President Xi gave a speech calling on the APEC members to boost sustainable, inclusive, green and interconnected development.

He said that China had released its plan for the implementation of the 2030 Agenda for Sustainable Development, and the country will pursue a development path of innovation, coordination, green, openness and sharing to continue to make contributions to the global and the Asia-Pacific development.

The APEC economic leaders agreed to build an open economy in the region, oppose protectionism, advance the FTAAP process and boost connectivity, thus injecting new impetus into the Asia-Pacific and global growth.

They also agreed that the outcomes of the previous meetings should be earnestly implemented and future cooperation be well planned for the sake of the long-term prosperity in the Asia-Pacific.

A declaration was issued after the annual economic leaders’ meeting.

Also on Sunday, President Xi, along with other economic leaders, attended a dialogue with International Monetary Fund Managing Director Christine Lagarde who gave a briefing on global economic situation.

Xi expounded China’s view on the world economy and reaffirmed the country’s resolve to boost reform and its confidence in the prospects of development.

The Chinese president arrived in Peru on Friday to attend the APEC Economic Leaders’ Meeting and pay his first state visit to the Latin American country.

The APEC meeting, hosted by Peruvian President Pedro Pablo Kuczynski, took place Saturday and Sunday in Lima, capital of Peru, under the theme of “Quality Growth and Human Development.”