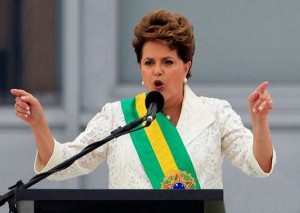 On May 11, Chinese Foreign Ministry announced that, Chinese Prime Minister Li Keqiang will accept the invitation of President of Brazil Rousseff, President of Columbia Santos, President of Peru Humala and President of Chile Michelle Bachelet, and will have official visits of this four countries during May 18 to 26 .

Among these official visits, the interaction between high-levels of both Brazil and China will once again meet another important moment. In summer of 2014, when the Chairman Xi Jinping visited Brazil, he used to say that “The two countries have become a common destiny.” Rousseff also stated a visit to China shortly after she was selected president of Brazil in January 2011.

Before this visit with Li Keqiang, President of Brazil Rousseff accepted an exclusive interview of CBN in the presidential residence in Brasilia.